A Passage Through Nunavut 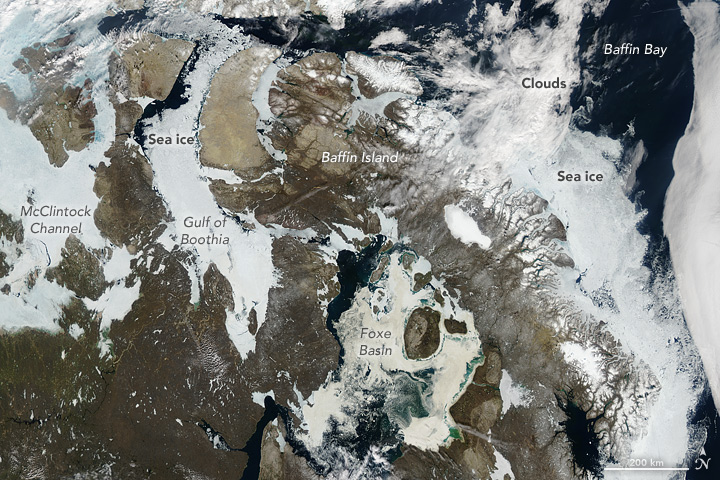 Summer usually brings foggy and cloudy conditions to Baffin Island, in the remote reaches of Canada’s Nunavut Territory. But on July 5, 2016, nearly-cloud free conditions provided an unusually clear view of the region.

This natural-color image was acquired by the Moderate Resolution Imaging Spectroradiometer (MODIS) on NASA’s Aqua satellite. Nunavut encompasses most of the Canadian Arctic Archipelago, a network of high-latitude of islands facing the Arctic Ocean. The scene shows a southern part of the archipelago. To the east, a bank of clouds hangs offshore of western Greenland.

While Baffin Island is not Nunavut’s northernmost isle, much of it falls within the Arctic Circle. That means cold, dark winters with days where the Sun never rises above the horizon. Temperatures plunge and gulfs, bays, and other waterways freeze over with sea ice. With the onset of summer and more hours of sunlight, that ice begins to break up.

In this image, summer sea ice still clogs the McClintock Channel and Gulf of Boothia. It persists in the fjords of Baffin Island and the narrow passage of Davis Strait. In contrast, ice in some of the larger bodies of water (such as Baffin Bay) has broken up, revealing the dark surface of the sea.

The waterways toward the left and top of the image are part of the southern route of the Northwest Passage—a winding maze of sounds, channels, bays, and straits that allows ships to pass from the Atlantic to the Pacific Ocean. For most of the recorded history of North America, the Passage has been nearly impassable. But the modernization of ships and the warming of Earth has made voyages through the Canadian Archipelago more common. According to news reports, the Nunavut Impact Review Board is considering whether to allow a luxury cruise ship to navigate from Alaska through the thawing southern passage in August 2016.

By August and September, further melting could make these waterways look dramatically different. In August 2015, the southern passage opened for several weeks, while the northern passage remained clogged. But whether the passage will completely open in 2016 remains to be seen; winds can move ice in unpredictable ways, pushing it into and out of channels.