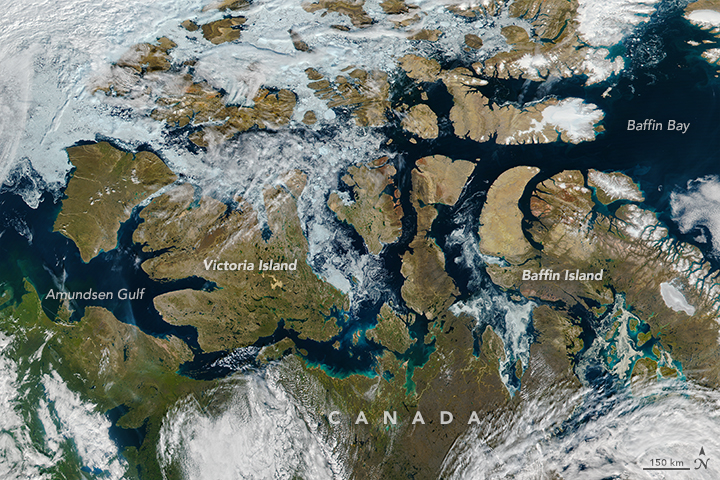 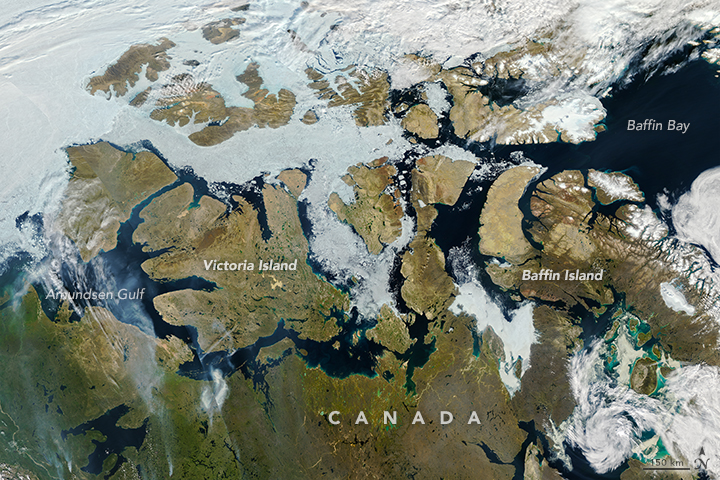 In August 2016, tourists on a luxury cruise departed Seward Alaska and steered toward the waterways of the Canadian Arctic Archipelago. The excursion is one example of the growing human presence in an increasingly ice-free Northwest Passage—the famed high-latitude sea route that connects the northern Atlantic and Pacific oceans. In mid-August 2016, the southern route through the Passage was nearly ice-free.

For most of the year, the Northwest Passage is frozen and impassible. But during the summer months, the ice melts and breaks up to varying degrees. The Visible Infrared Imaging Radiometer Suite (VIIRS) on the Suomi NPP satellite captured the top image of the Northwest Passage on August 9, 2016. A path of open water can be traced along most of the distance from the Amundsen Gulf to Baffin Bay.

“It was a warm winter and spring,” said NASA sea ice scientist Walt Meier. That means that the seasonal ice—ice that grew since the end of last summer, and the type found throughout most of the Passage—is thinner than normal. Thinner ice can melt more easily, break up, and move out of the channels.

A scattering of broken ice is visible just east of Victoria Island. “It looks pretty thin and disintegrating,” Meier said. “I think an ice-strengthened ship could get through without too much trouble.”

The open water this year flows along the southern route, or “Amundsen route.” It’s not unusual for the southern route to open up to some degree, as it is more protected than the northern route and receives less sea ice directly from the Arctic Ocean.

At some point in almost every summer since 2007, conditions along the southern passage have been fairly open. There have been exceptions; the second image shows the Northwest Passage on August 9, 2013, as observed by the Moderate Resolution Imaging Spectroradiometer (MODIS) on the Aqua satellite. Ice that year was relatively extensive. Turn on the image comparison tool to see the difference.

What’s left of the ice in 2016 is opening up fast. Meier expects that the Northwest Passage will open up completely in the next couple of weeks. Moreover, a strong Arctic cyclone appears to be approaching the archipelago. It could push the ice around and further open up still-blocked channels. Or, it could have the opposite effect and push in ice from the north.

NASA image by Jeff Schmaltz, LANCE/EOSDIS Rapid Response, using VIIRS data from the Suomi National Polar-orbiting Partnership satellite. Suomi NPP is the result of a partnership between NASA, the National Oceanic and Atmospheric Administration, and the Department of Defense. Caption by Kathryn Hansen.