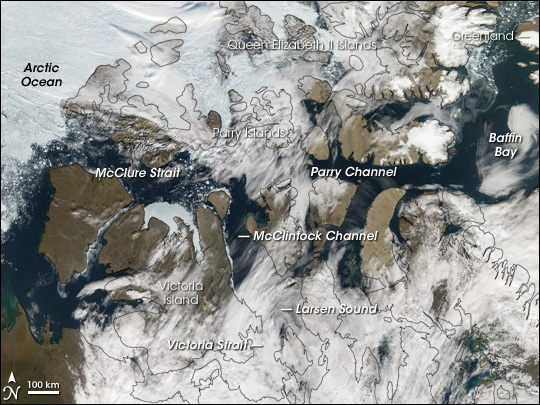 For over 500 years, Arctic explorers have sought a passage between the North Atlantic and Pacific Oceans. Such a passage, often called the Northwest Passage, would connect Europe to Asia via shorter routes than the long voyage south around Africa. In 1497, English King Henry VII sent Italian explorer John Cabot to look for this hypothetical route and expeditions from some of the most famous explorers in the centuries that followed—Sir Francis Drake and Captain James Cook among them—met with failure. The combined efforts of a number of explorers eventually uncovered a winding path from the Atlantic to the Arctic and Pacific Oceans through the ice-bound islands of northern Canada. Even in modern times, navigating from the Atlantic to the Pacific through Canada’s Arctic islands has been difficult. The summer of 2007, however, melted enough sea ice in Canada’s far north to open up this long-sought passage.

This image shows the islands north of mainland Canada adjacent to Greenland, as observed by the the Moderate Resolution Imaging Spectroradiometer (MODIS) flying on NASA’s Aqua satellite on August 29, 2007. While the usual veil of clouds over the Arctic is visible through the scene, the sea ice pack that normally covers the water between the islands is absent. Areas often choked with ice at this time of year, but free of it in this MODIS scene, include the Parry and McClintock Channels and the McClure Strait. Larsen Sound and Victoria Strait are hidden beneath cloud cover, but they are also largely free of sea ice. This provided a nearly ice-free connection between Baffin Bay (a long body of water between Canada’s Baffin Island and Greenland that is regularly ice-free in summer) and the Arctic Ocean. An ice-free gap between the North American mainland and the Arctic sea, not shown here, extends all the way to the Bering Strait between Alaska and Russia, creating a connection almost free of all sea ice from the North Atlantic to the North Pacific.

Multi-year ice (ice that survives more than one melt season) tends to be thicker and more resistant to melt than first-year ice (formed over just one winter). According to John Falkingham of the Canadian Ice Service, most of the multi-year ice melted from Victoria Strait and McClintock Channel in the summer of 2006, leaving these traditionally difficult areas more open. In mid-August 2007, only patchy areas of ice filled Victoria Strait and Larsen Sound. Falkingham described the Northwest Passage as “nearly open.” Changes in the Northwest Passage were part of a larger pattern of melt in 2007 that also affected the East Siberian Sea.

Although nearly open, the Northwest Passage was not necessarily easy to navigate in August 2007. Located 800 kilometers (500 miles) north of the Arctic Circle and less than 1,930 kilometers (1,200 miles) from the North Pole, this sea route poses significant challenges, and the severe depletion of sea ice means only one of these is reduced. Nevertheless, long-term opening of the passage would have global impacts on trade and natural resource use.

You can download a 250-meter-resolution KMZ file of the Northwest Passage suitable for use with Google Earth.

During the summer of 2007, sea ice melt opened the fabled and long-sought Northwest Passage.