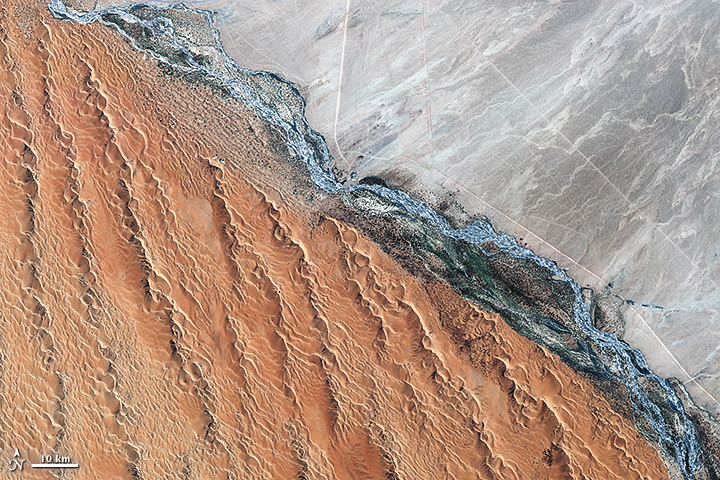 This image of the day is the answer to the November 2014 puzzler.

Humans draw borders and dividing lines on the landscape, real and virtual. Nature sometimes does the same, as revealed in this satellite image of Namibia. On one side of the Kuiseb River stand some of the tallest sand dunes in the world (as high as 150 meters). On the other side, the landscape is as barren and rocky as it is dry. The ephemeral river blocks the march of sand from the south side to the north.

The Kuiseb River rarely reaches the sea; it last did so in 2011, the first time in half a century. The GeoEye-1 commercial satellite captured this image of the river on March 15, 2011, as flood waters were flowing toward the coast. The image above shows a western portion of the river close to the mouth of Walvis Bay.

The waters crossing this otherwise parched landscape nurture a riparian ecosystem and a native people. In this way, the Kuiseb is not just a border but a sanctuary. Efforts to conserve such fragile areas around the world are being aided by observations from space-based sensors. A new book highlights how the view from space can be used to protect some of the world’s most interesting, changing, and threatened places. The book also conveys the power of perspective in understanding our connection to the land, as shown in this excerpt:

Along the ephemeral Kuiseb River in the Namib Desert live the Topnaar People. They are among the earliest indigenous groups in southern Africa, and they were among the first people to be allowed to reside in a national park in Namibia. About 400 live along the river, at the bottom of the sand dunes, and at the border of the gravel plains of the central Namib Desert.

Anna Bees is one of these people. Now in her mid-sixties, Anna has been a domestic worker at the Gobabeb Training and Research Centre for most of her life.

Juliane Zeidler recalls that when she was a young researcher at the Gobabeb Centre in 1996, her sister Sinje arrived in a small Cessna. Sinje made it possible for every Topnaar worker at the station to get into the plane and see the beautiful desert from above. As much as the flight was intended to leave a great impression on the Topnaar workers, it also left Juliane and Sinje with a profound memory.

The sisters marveled at how Annaâ€”who rarely ventured beyond her village â€” excitedly pointed out where she lived, where she harvested the endemic Nara plant, where she would take her goats to graze, and where she would visit her children in their villages. Juliane recalls: “It was absolutely amazing to see that someone who has never seen anything from the birds’ perspective could identify the environment with such precision and confidence.”

Sanctuary: Exploring the World’s Protected Areas from Space is a free ebook available for download here. It was published by the Institute for Global Environmental Strategies with support from NASA, and it was released at the 2014 World Parks Congress in Sydney, Australia.

Image courtesy of Digital Globe, via the Institute for Global Environmental Strategies. Caption by Michael Carlowicz. Congratulations to Geoff Thiemann, who was the first to solve this puzzler. Alexandre Mathieu was a close second and provided additional details. 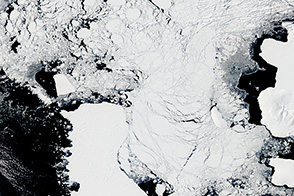