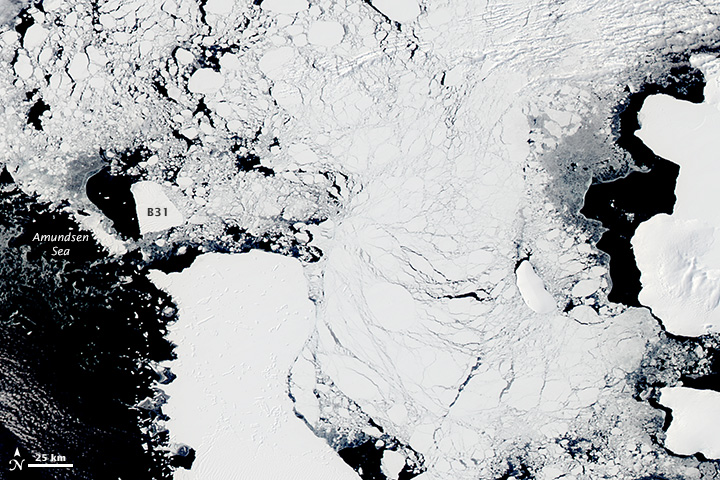 Winter has lifted from Antarctica’s Pine Island Bay, bathing the area in summer sun. As a result, overpassing satellites can once again acquire sunlit views of massive iceberg B31 as it drifts in the Amundsen Sea.

In early November 2013, the giant iceberg separated from the front of Antarctica’s Pine Island Glacier and began to move across Pine Island Bay, a basin of the Amundsen Sea.

Since the iceberg’s initial separation, NASA Earth Observatory has posted several images showing its journey up until March 11, 2014. The U.S. National Ice Center (NIC) reported that the size of B31 a did not change much between December 2013 and April 2014.

Earth Observatory's first look (above) at B31 following the Southern Hemisphere winter was acquired by the Moderate Resolution Imaging Spectroradiometer (MODIS) on the Aqua satellite on November 22, 2014. By that date, B31 had moved west in the Amundsen Sea and was free of surrounding debris and sea ice. Scientists expect that the berg will continue moving west.

Icebergs of this size are irregular but not infrequent in Antarctica, noted University of Sheffield geographer Grant Bigg in a recent article about B31. In fact, the Southern Ocean routinely has between 30-40 icebergs that are larger than 18 kilometers (10 nautical miles) long.

Still, scientists and others will track the trajectory of B31 closely as it enters the Southern Ocean. Maritime agencies, in particular, track icebergs because of the danger they can pose to ships.

A view of ice island B31 at the start of Antarctic summer shows the berg is headed west in the Amundsen Sea. 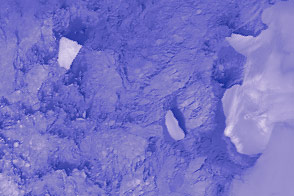 Another Berg from Pine Island Glacier

Cracks that spread across the floating ice for months have finally spawned new icebergs.