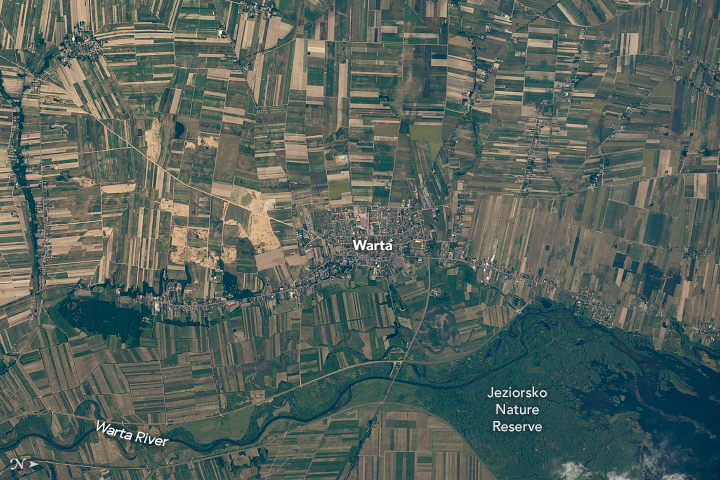 Farm fields of varying shapes and sizes cover many rural areas of Europe. The very narrow, rectangular plots in this photograph caught the eye of an astronaut as the International Space Station passed over west-central Poland. A tributary of the Oder River, the Warta River flows past the town of the same name. (Note that north is to the right in this photo.)

Damming of the Warta River in the 1980s created one of the largest reservoirs in the Lodz region of Poland. The dam was intended for agricultural irrigation, recreation, and for flood mitigation in the Warta River Valley. The upper end of the reservoir appears in the lower right of the image.

The rural town of Warta, an agricultural community established in the mid-1200s, is home to many small, privately owned farms that mostly produce grains. Research suggests that there are old historical roots for those long and thin agricultural sections.

During the spring and summer months, the southern part of the Jeziorsko Reservoir tapers off into a wet, marshy delta; it also serves as an ornithological refuge to protect species of wetland birds that live near or travel to the reservoir. The Jeziorsko Nature Reserve is the largest reserve in the Lodz Province. It is one of the many protected areas in the Natura 2000 program, designed to protect endangered species and habitats throughout Europe. Natura 2000 refuges make up nearly 20 percent of Poland’s area.

Astronaut photograph ISS048-E-7144 was acquired on June 26, 2016, with a Nikon D4 digital camera using an 800 millimeter lens and is provided by the ISS Crew Earth Observations Facility and the Earth Science and Remote Sensing Unit, Johnson Space Center. The image was taken by a member of the Expedition 48 crew. The image has been cropped and enhanced to improve contrast, and lens artifacts have been removed. The International Space Station Program supports the laboratory as part of the ISS National Lab to help astronauts take pictures of Earth that will be of the greatest value to scientists and the public, and to make those images freely available on the Internet. Additional images taken by astronauts and cosmonauts can be viewed at the NASA/JSC Gateway to Astronaut Photography of Earth. Caption by Sara Schmidt, GeoControl Systems, JETS Contract at NASA-JSC.

Narrow, rectangular farm plots with historic roots spread across the landscape near Warta. 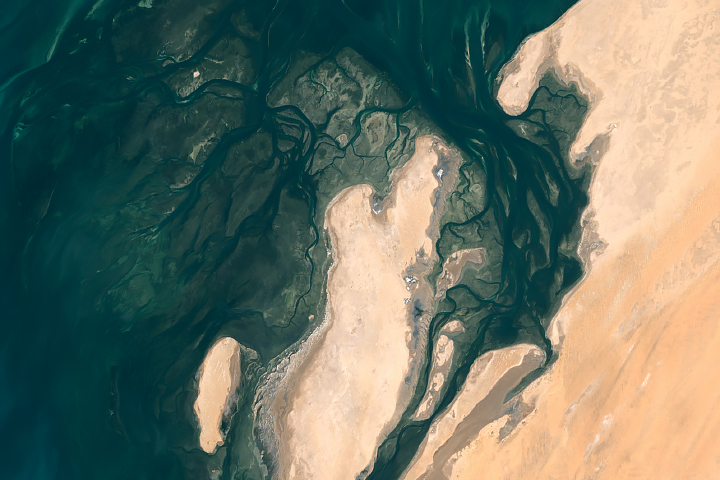