Measuring Movement from the Ridgecrest Quake 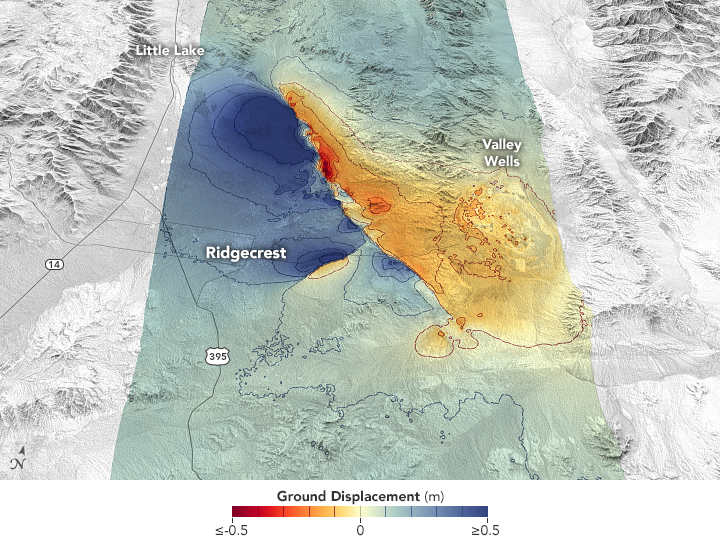 The ground beneath Southern California moved furiously in early July 2019 due to two large earthquakes, one of which was the strongest in the region in at least two decades. Remote sensing scientists are getting better at measuring such events and showing how they disrupt and move the land surface.

At 10:33 a.m. Pacific Daylight Time (PDT) on July 4, 2019, an earthquake struck northeast of Ridgecrest, California, which is north of Los Angeles and northeast of Bakersfield. The magnitude 6.4 temblor turned out to be a foreshock of a stronger quake—magnitude 7.1—that occurred at 8:19 p.m. PDT on July 5 about 6 miles (11 kilometers) to the northwest. In the days and weeks that followed, thousands of aftershocks rumbled beneath Southern California, the vast majority of them too small to be felt by humans. Though news outlets described some damage to business and residential property, no major casualties or infrastructure breaks were reported.

According to the U.S. Geological Survey, the Ridgecrest earthquakes released energy along at least two shallow strike-slip faults about 100 miles (150 kilometers) northeast of the San Andreas Fault. The quakes fell within the Eastern California shear zone (sometimes called Walker Lane), in an area where the faults and their connections are less understood than the San Andreas.

The maps on this page are based on data from the Advanced Rapid Imaging and Analysis (ARIA) team at NASA’s Jet Propulsion Laboratory (JPL) and the California Institute of Technology’s Seismological Laboratory, as well as a digital elevation model to show the contours of the land surface. The first map depicts the amount of ground displacement—land shifting vertically, horizontally, or both—in meters. Blue areas moved roughly northwest (horizontally) and up (vertically), while red and orange areas moved southeast and down. The map below shows this displacement visualized in three dimensions.

The first earthquake (M6.4) involved motion on a fault aligned from northeast to southwest; this is visible on the map above as a difference in the colors between Ridgecrest and the area to the southeast. That quake probably triggered the larger earthquake (M7.1) with motion on a nearly perpendicular fault running northwest to southeast (the much stronger color discontinuity).

ARIA researchers compiled and processed synthetic aperture radar (SAR) data from the Japan Aerospace Exploration Agency’s ALOS-2 satellite. SAR instruments bounce radio signals off of the ground and measure the reflections to determine the distance between the ground and the satellite. By comparing SAR images from different days, scientists can determine how much the land surface and human-built structures have shifted. (The ARIA team also used the data to create a map depicting areas that were likely damaged as a result of the earthquakes.)

“These radar movement maps tell scientists where the faults moved and how much each part of the faults moved during the two earthquakes,” said Eric Fielding, a geophysicist and part of the ARIA group. “Geophysicists can then use computer models to estimate how stress has increased or decreased on other faults in the surrounding area.”

NASA provides such maps to the California Geological Survey, the Federal Emergency Management Agency, and USGS as they assess damages and map the faults. The analysis can be used to estimate where the fault moved deep and which areas have increased stress and higher likelihood of future earthquakes.

“The SAR data were very useful for field mapping teams to help guide them where faults are located,” said Chris Milliner, a geophysicist at JPL. “One interesting result is that the SAR revealed many more faults surrounding the main rupture than was anticipated, which might have been missed in the field without this remote guidance.”

Remote sensing scientists are getting better at measuring such events and showing how they disrupt and move the land surface. 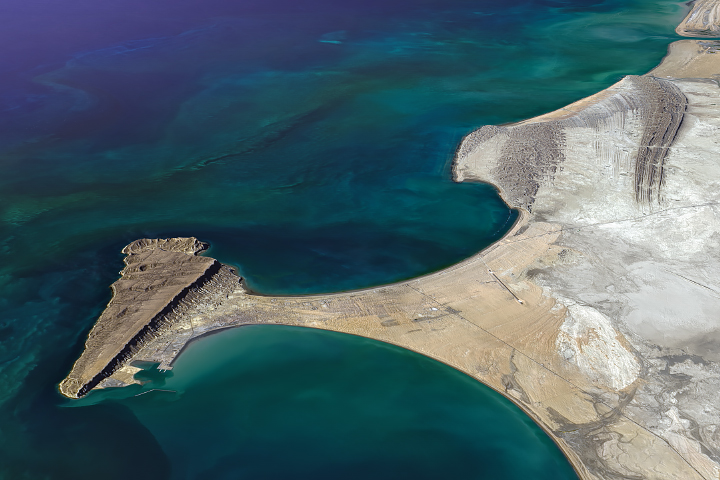