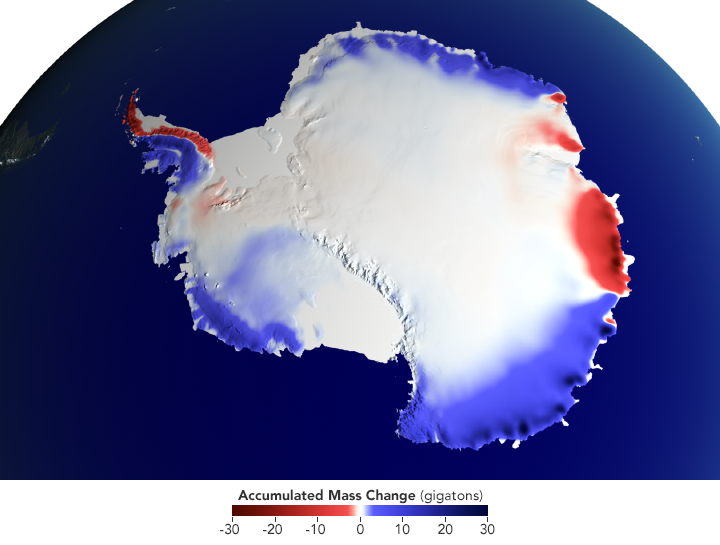 A new NASA-led study has determined that an increase in snowfall accumulation over Antarctica during the 20th century offset global sea level rise by one centimeter (0.4 inches). However, the additional ice mass gained from snowfall makes up for just one third of the current ice loss in Antarctica.

“Our findings don’t mean that Antarctica is growing; it is still losing mass, even with the extra snowfall,” said Brooke Medley, a glaciologist at NASA’ Goddard Space Flight Center and lead author of the study. “What it means is that without these gains, we would have experienced even more sea level rise in the 20th century.”

The polar ice sheets grow via snow accumulation and shrink through melting and the production of icebergs. Presently, both the Arctic and Antarctic ice sheets are imbalanced—that is, they are losing more ice annually than they are gaining. That ice loss is estimated to be causing about half of the observed global change in sea level. However, sea level also adjusts to changes in snowfall, which modulates how much water is locked into ice sheets.

The map above shows accumulated mass change over Antarctica from 1900 to 2000. It was assembled from data provided by scientists from NASA Goddard and the British Antarctic Survey, who blended measurements from ice cores with computer modeling. Shades of blue indicate mass gains, while reds indicate losses. The research was published in the December 10, 2018, issue of Nature Climate Change.

Snowfall is very difficult to measure over Antarctica. First, there are very few weather stations on the frozen continent, and most of them are installed along the coastline. Secondly, satellites have a hard time measuring snow from space; they often confuse snow that is falling down with the snow that is already on the ground. And climate models struggle to replicate the total amount of snow that falls over Antarctica each year.

So scientists often have to rely on ice cores: cylinders of ice drilled from the ice sheet. The layers in the ice, like rings in a tree stump, store a wealth of information, such as how much snow fell in a certain year or decade. But drilling ice cores is also logistically challenging, so they are sparse and do not cover the entire continent.

Medley and Elizabeth Thomas (British Antarctic Survey) used 53 ice cores and three atmospheric reanalyses—climate models informed by satellite observations—to reconstruct how much snow fell over the Antarctic continent and nearby islands from 1801 to 2000. They found that the distribution of ice cores gave a good coverage of most of the continent, with some gaps in portions of East Antarctica due to the fact that this area sees extremely little snowfall.

Medley and Thomas found that snow accumulation on Antarctica increased over the 20th century by 0.10 centimeters (0.04 inches) per decade, and that rate more than doubled after 1979. “From the ice cores we know that the current rate of change in snowfall is unusual in the context of the past 200 years,” Thomas said.

Researchers also investigated the causes of increased snowfall and the changes in its distribution pattern across the 20th century. Increasing snowfall is consistent with a warming atmosphere because warmer air holds more moisture. And in a related paper published in Geophysical Research Letters, researchers found a relationship between stratospheric ozone depletion (the ozone hole) and increased snowfall over Antarctica through changes in Antarctic circumpolar westerly winds.

“Snowfall plays a critical role in Antarctic mass balance and it will continue to do so in the future,” Medley said. “Currently it is helping mitigate ice losses, but it’s not entirely compensating for them. We expect snowfall will continue to increase into the 21st century and beyond, but our results show that future increases in snowfall cannot keep pace with oceanic-driven ice losses in Antarctica.” 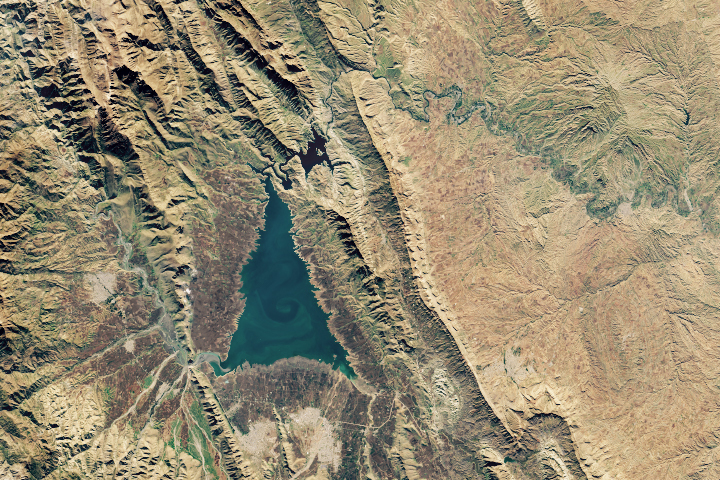