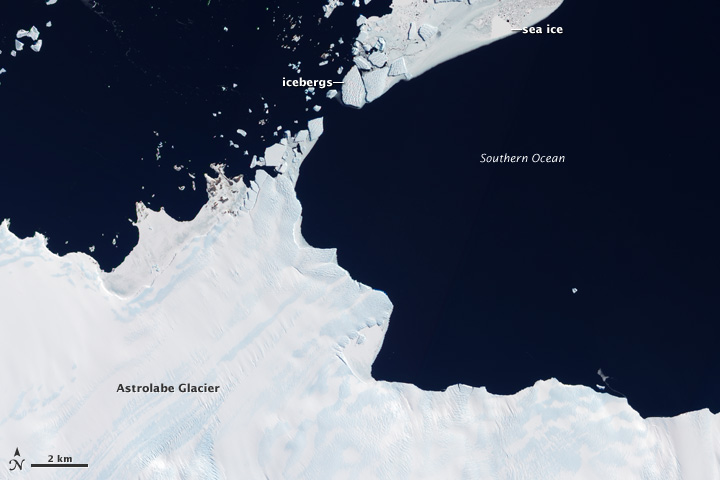 Located in the Terre Adélie-George V Land section of East Antarctica, Astrolabe Glacier streams out from the interior of Antarctica to dump ice into the sea. This outlet glacier is estimated to be 10 kilometers (6 miles) wide, and the drainage basin that feeds it stretches as much as 200 kilometers (120 miles) inland. Astrolabe is named for the flagship of Captain Jules Dumont d’Urville’s 19th century expedition to Antarctica.

The Advanced Land Imager (ALI) on NASA’s Earth Observing-1 (EO-1) satellite captured this natural-color image of Astrolabe on November 28, 2010, in late austral spring. Icebergs were breaking off from the glacier tongue—which extends from the coast like a shelf over the open water of the Southern Ocean—and running into sea ice. The calving front is roughly 7 kilometers (4 miles) wide, and scientists estimate that it loses half a cubic kilometer of ice per year.

The ice calving shown in this image is not necessarily unusual for the region or the time of year. But what is unusual is how much more calving all the glaciers of Antarctica and Greenland have been doing in the past two decades.

According to a new NASA-funded satellite study, the Greenland and Antarctic ice sheets are losing mass at an accelerating pace and are overtaking ice loss from mountain glaciers and ice caps to become the dominant contributor to global sea level rise. The graph above shows the gain and loss of ice mass from the world's two largest ice sheets. Though there are gains within individual years, the overall trend from 1992 to 2010 has been toward losses.

“That ice sheets will dominate future sea level rise is not surprising—they hold a lot more ice mass than mountain glaciers,” said lead author Eric Rignot, jointly of NASA’s Jet Propulsion Laboratory and the University of California, Irvine. “What is surprising is this increased contribution by the ice sheets is already happening. If present trends continue, sea level is likely to be significantly higher than levels projected by the United Nations Intergovernmental Panel on Climate Change in 2007.”

The authors conclude that, if current ice sheet melting rates continue for the next four decades, their cumulative loss could raise sea level by 15 centimeters (5.9 inches) by 2050. While this provides one indication of the potential contribution ice sheets could make to sea level in the coming century, the authors caution that considerable uncertainties remain in estimating future ice loss acceleration.