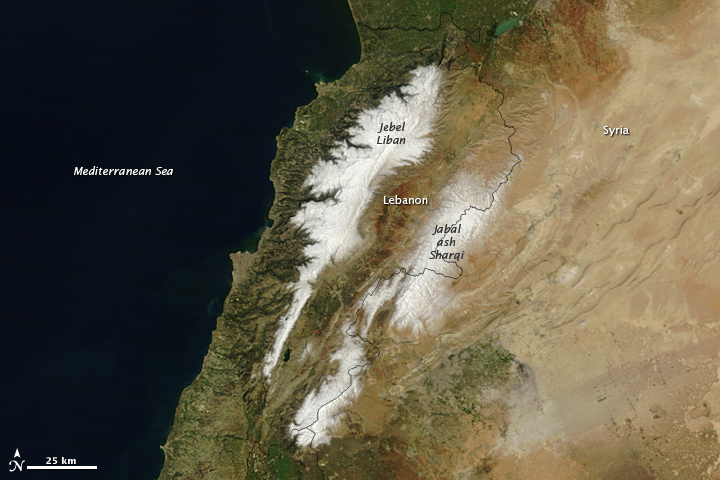 Bordering the eastern Mediterranean Sea, Lebanon might call to mind sunny beaches and historic port cities like Sidon and Tyre. However, the country is also home to towering, snowy mountains and ski resorts. In fact, the name Lebanon is derived from the Semitic word lbn, which means “white” in reference to either the snow-covered mountains or limestone cliffs.

The two mountain ranges are covered in fresh snow. A few days before the image was taken, a late-winter storm coated the mountains with up to a meter of snow, said local news reports. Snow is not unusual in Lebanon, where ski resorts are open about three months of the year. In the winter of 2010-2011, ski resorts opened in mid-December and were expected to stay open through late March or early April. Like Southern California, which is at the same latitude and has a similar climate, Lebanon receives snow primarily in the high mountains, where temperatures are cooler.

The large image, which encompasses a wider area, also shows snow in the coastal mountains of Syria and Turkey.