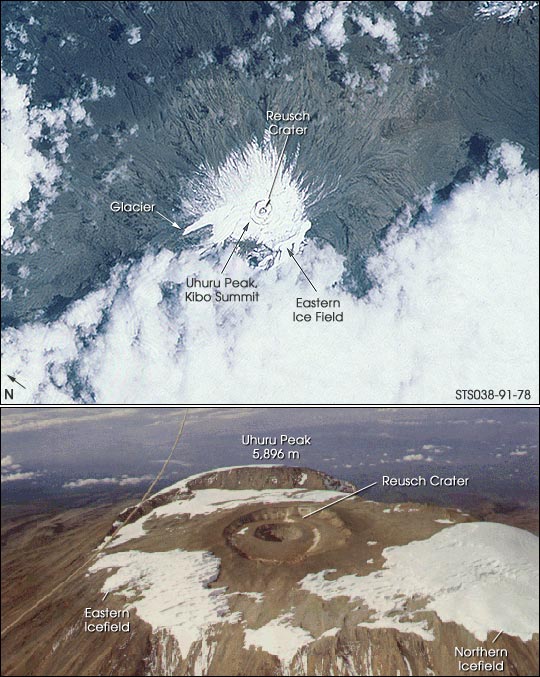 Glaciers covered most of the summit of Mt. Kilimanjaro during the first half of the twentieth century but have shrunk dramatically since then. The photograph above was taken in November 1990 by the Space Shuttle mission STS-38 crew (STS038-91-78). It depicts the summit glaciers with extensive seasonal snow cover, whereas the image below was taken from a balloon in 1974.

Another photograph of Kilimanjaro taken by the crew of Space Shuttle mission STS-97 on December 2, 2000 depicts the glaciers with less snow cover. Though difficult to determine from these two images, the glaciers have receded over the past 10 years.

Mountain glaciers are sensitive indicators of climate change, and those at tropical latitudes are particularly responsive. Mid-latitude and tropical glaciers have significantly decreased in area and volume over the past century. At the February 2001 meeting of the American Association for the Advancement of Science (AAAS), researchers reported dramatic changes in the volume of ice capping the Kibo summit of Kilimanjaro. An estimated 82 percent of the icecap that crowned the mountain when it was first thoroughly surveyed in 1912 is now gone, and the ice is thinning as well—by as much as a meter in one area. According to some projections, if recession continues at the present rate, the majority of the glaciers on Kilimanjaro could vanish in the next 15 years.

Mt. Kilimanjaro (Tanzania), the highest point in all Africa, was photographed by the crew of Space Shuttle mission STS-97 on December 2, 2000. Kilimanjaro (Kilima Njaro or “shining mountain” in Swahili) is capped by glaciers on its southern and southwestern flanks.