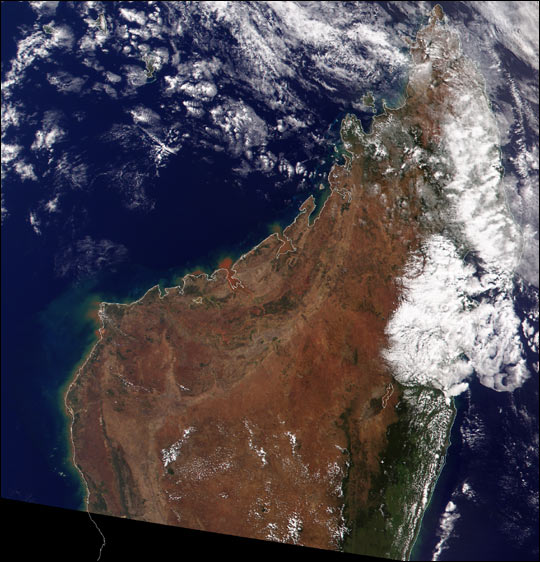 Once almost entirely covered in green, lush vegetation, Madagascar has witnessed the destruction of an estimated 80 percent of its indigenous forests. The now reddish-brown terrain can be seen in this true-color image of northern Madagascar acquired on May 24, 2000, by the Moderate-resolution Imaging Spectroradiometer (MODIS), flying aboard NASA’s Terra spacecraft.

Most of Madagascar’s 15.5 million residents live and work on the temperate, mountainous plateau that runs through the center of the island. Over the past century they have cleared the original vegetation on most of the plateau for rice farming using slash and burn techniques. Driven by a need to feed an ever increasing population, the people of Madagascar continue to encroach on the forests that lie along the coasts.

Most of what is left of Madagascar’s native vegetation can be seen on the right side of the island in dark green on the image. While this vegetation on the east coast of the island is primarily tropical rain forest, the indigenous vegetation on the west coast is dry tropical deciduous forest. The presence of the plateau has given rise to these two distinct ecosystems. In both areas, a number of animals and plants unique to Madagascar are threatened by the deforestation. The most notable of these are the 32 species of lemur that are endemic to the island. Only two percent of the island’s wilderness is protected.

Image by Brian Montgomery, Robert Simmon, and Reto Stöckli, based on data provided by the MODIS science team.