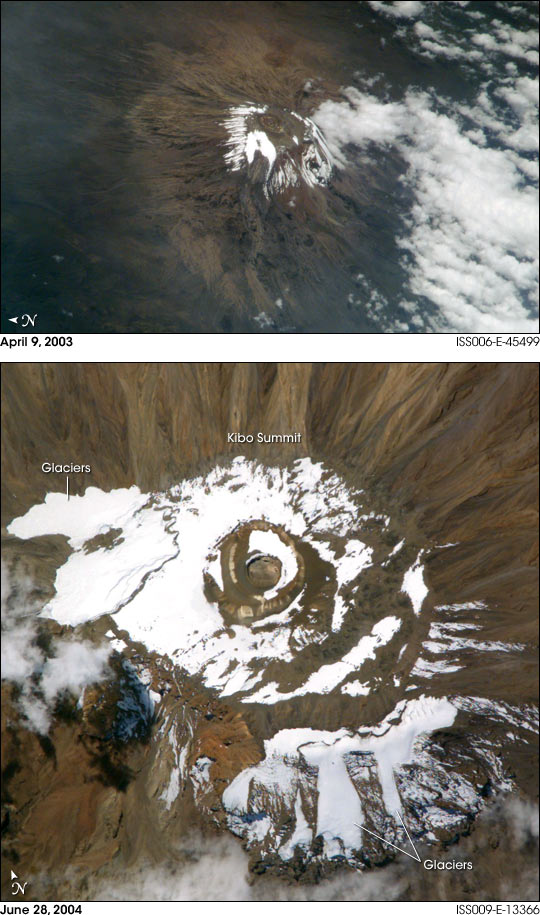 Mount Kilimanjaro is a dormant stratovolcano and the highest mountain in Africa. Kibo Summit (5,893 m) at the top of Kilimanjaro is one of the few peaks in Africa to retain glaciers. The top image above is a high oblique photograph taken from the International Space Station in early April 2003. That photograph provides a 3-dimensional perspective on the positions of the glaciers on the upper northwestern and southern flanks of the mountain. The bottom photograph, taken from the International Space Station in late June 2004, shows large glacier fields (blue-white, with defined edges) on the northwestern and southern slopes of the peak. In this scene, a light layer of snow brightens the dark brown terrain around the glaciers.

Scientists use ice cores, an automated weather station, computer modeling, and images like these as tools to learn about the past and present activity of Kilimanjaro’s receding glaciers. One atmospheric scientist at the University of Wisconsin-Madison found clues that link reduced cloud cover to post-1880 decreased water levels in East African lakes. Lake evaporation indicates a decrease in both precipitation and cloudiness around Kilimanjaro. These two images illustrate the changes over time in snow cover at the summit as well as the current extent of the glaciers themselves. Light brown outwash channels from the northwestern flank icefield are particularly evident in the oblique photograph (top). While clear conditions over Kilimanjaro allow for the collection of spectacular images like these, the lack of cloud cover may be a cause for the glaciers’ retreat. Reduced cloud formation over the summit leads to reduced precipitation of snow cover on and around the icefields. This is turn reduces the reflectivity of solar energy from the summit, leading to increased thermal warming and melting of ice.

Most scientists agree that the glaciers of Mt. Kilimanjaro will be gone by the year 2020, but there is less agreement as to why they are now receding. Climatologists are now studying current weather trends, environmental changes from the late 1800s, and historical records of the mountain climate compared with longer-term climate records at lower elevations. Use of the ice core data together with ongoing meteorological data collection at the summit may help further refine models (and understanding) of the glaciers’ retreat. The loss of Kilimanjaro’s permanent ice fields will have both climatological and hydrological implications for local populations who depend on access to melt water from the ice fields as a source of fresh water during dry seasons and monsoon failures.