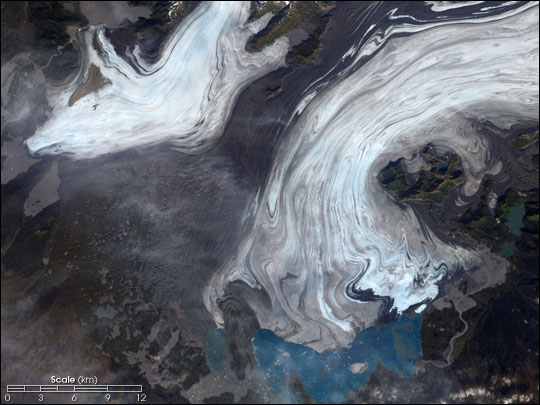 Bering Glacier currently terminates in Vitus Lake south of Alaska’s Wrangell-St. Elias National Park, about 10 km from the Gulf of Alaska. Combined with the Bagley Icefield, where the snow that feeds the glacier accumulates, the Bering is the largest glacier in North America. Warmer temperatures and changes in precipitation over the past century have thinned the Bering Glacier by several hundred meters. Since 1900 the terminus has retreated as much as 12 km. (The Bering Glacier ‘surges,’ an acceleration of the flow rate of the glacier, every 20 years or so. During these periods the glacier terminus advances. The surges are generally followed by periods of retreat, so despite the periodic advances the glacier has been shrinking overall.) Most of the glaciers along the Alaskan coast are retreating along with the Bering Glacier.

The glacial retreat has an interesting side effect—an increase in the frequency of earthquakes in the region. The Wrangell and St. Elias mountain ranges that spawn the Bering Glacier were created by the collision of the Pacific and North American tectonic plates [the Pacific Plate is sliding underneath (being subducted by) the North American Plate]. The weight of the vast amount of ice in the Bering Glacier is enough to depress the Earth’s crust, stabilizing the boundary between the two plates. As the glaciers lose mass, the pressure of the ice is diminished. This reduced compression allows the rocks along faults to move more freely, resulting in more Earthquakes.

This true-color image of the Bering Glacier terminus was acquired on September 29, 2002, by the Enhanced Thematic Mapper plus (ETM+) instrument aboard the USGS/NASA Landsat-7 satellite. An image acquired on October 27, 1986, by the Thematic Mapper aboard Landsat-5 shows the terminus before a surge that lasted from 1993 through 1995. From 1995 until 2002 the glacier retreated to (roughly) its position in 1986.

Jeanne Sauber of NASA’s Goddard Space Flight Center, and Bruce Molnia, a research geologist at USGS, used NASA satellite data, GPS data, and computer models to study the interactions between the retrerating glacier and the movement of the Earth’s crust.

NASA Image by Robert Simmon, based on data provided by the Landsat 7 Science Team