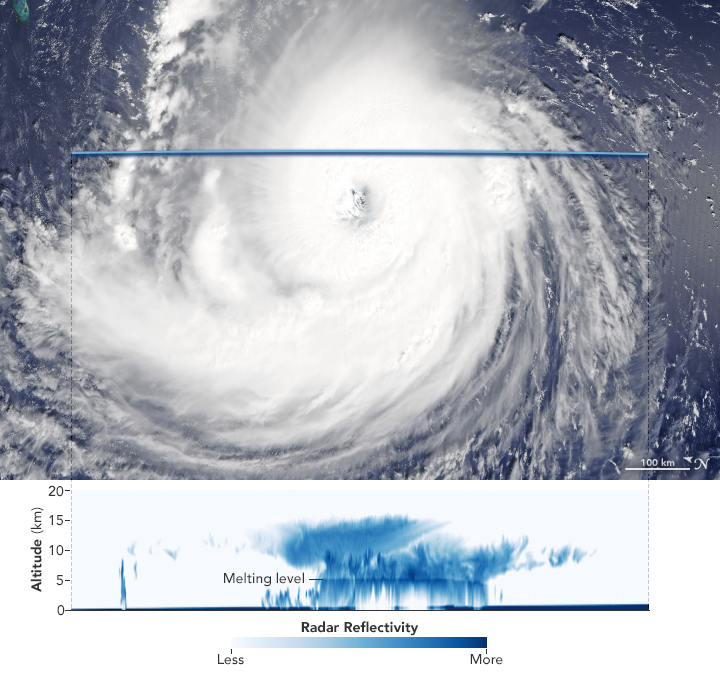 In April 2006, a Boeing Delta II rocket launched CloudSat, along with a second satellite, CALIPSO, into space on two- and three-year missions to study the world’s clouds and a mix of airborne particles called aerosols.

Twelve years later, both satellites are still chugging along, though it has not always been easy going in recent years. In CloudSat’s case, only a series of orbital maneuvers and other technical fixes have kept the satellite returning useful science data in the twilight years of its mission.

One of CloudSat’s most recent acquisitions—a view of the inner structure of Hurricane Florence as the storm took aim for the Carolinas—underscores the mission’s scientific value. This natural-color image shows how Hurricane Florence appeared from above to the Moderate Resolution Imaging Spectroradiometer (MODIS) on the Aqua satellite on September 11, 2018. The second image, acquired by CloudSat on the same day, shows a cross-section—how the storm would look if it had been sliced near the middle and viewed from the side. The blue line is the north-to-south track that CloudSat flew over Florence. Note that the MODIS image has been rotated.

The CloudSat pass offers a unique view of Florence’s asymmetrical structure, the intense convection and rainfall churning inside the storm, and the complex vertical cloud structure that is not visible from above. The storm’s clouds reached an altitude of about 15 kilometers (9 miles) at their highest point—fairly high for a tropical cyclone.

The darkest blues represent areas where clouds and raindrops reflected the strongest signal back to the satellite radar. These areas had the heaviest precipitation and the largest water droplets. The blue horizontal line across the data is the melting level; ice particles were present above it, raindrops below it. Note how the radar detects more signal immediately below this line. “It almost looks like two images were pasted together and not matched very well,” said Philip Partain, a researcher at Colorado State University who helped design CloudSat’s data processing system. “That’s because falling ice crystals become coated in water as they pass the melting level and become very reflective to the radar.”

With its 94 GHz radar, CloudSat does not measure patches of the heaviest rainfall well. “Very heavy rain weakens the signal, and we can’t get good measurements in those areas,” continued Partain. “You can see that happening in the image where the signal from the ocean’s surface, which is obviously highly reflective outside the storm, disappears in the center of the storm.”

However, CloudSat has some allies on its mission to study Earth’s clouds from above. NASA’s Global Precipitation Mission (GPM) has a complementary radar tuned to a slightly different wavelength that excels at making measurements of the heavy rains found in the heart of tropical cyclones. For example, see this visualization of GPM’s view of intense rainfall within Florence on September 7, 2018.

The Cloud-Aerosol Lidar and Infrared Pathfinder Satellite Observation (CALIPSO), the satellite that launched alongside CloudSat, also collects complementary measurements, but of especially fine-grained particles and droplets that are difficult for both CloudSat and GPM to detect. For several years, CloudSat and CALIPSO flew near each other as part of the Afternoon Constellation, or A-Train, of satellites, a strategic type of formation flying designed to maximize the scientific value of the data collected by the participating satellites.

In February 2018, CloudSat mission engineers at NASA’s Jet Propulsion Laboratory in Pasadena, California, executed two thrusters burns that lowered the satellite’s orbit out of the A-Train following the loss of one of four reaction wheels, devices that help control the spacecraft’s orientation. The maneuvers lowered CloudSat’s orbit from 705 kilometers (438 miles) above the surface to 688 kilometers.

“The spacecraft is flying now in what we call the graveyard orbit,” said Partain. While mission planners hope to see Cloudsat continue to collect data through 2022, small problems can become big problems with a satellite of such an advanced age. “We don’t have much room left for error at this point,” said Partain. “At any point, we could lose the battery, the radar, or another one of the reaction wheels.”

At least Cloudsat won’t be flying alone during its golden years. The scientists and engineers who manage CALIPSO decided to ease that satellite out of the A-Train and into an orbit near CloudSat, making it possible for the two satellites to continue making coincident observations. By late September, CALIPSO will have resumed its familiar position about 4 kilometers (2 miles) ahead of CloudSat, just like the two satellites flew for years as part of the A-Train.

“Every satellite has its blind spots and no satellite will last forever,” said Natalie Tourville, a Colorado State University scientist who has been compiling a database of CloudSat overpasses of tropical cyclones in order to better understand the anatomy and behavior of the storms. “But my fingers are crossed that CloudSat will deliver many more storm overpasses as impressive as this one in the coming years.”