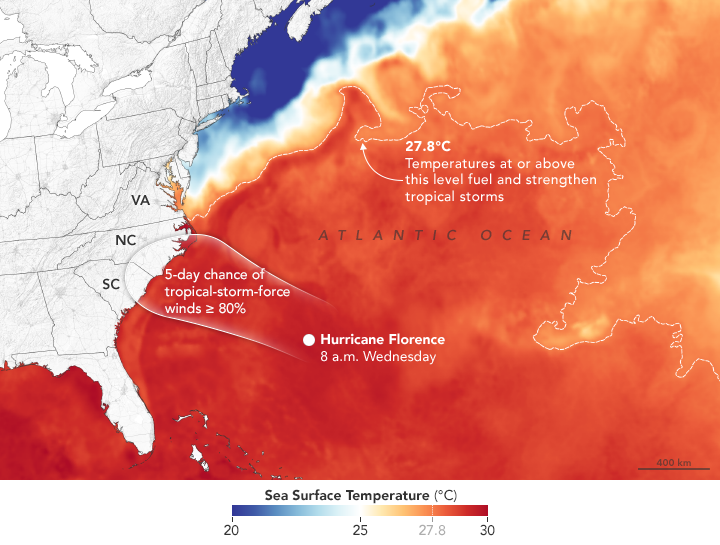 As millions of people along the Atlantic Coast of the United States board up windows and evacuate before Hurricane Florence makes landfall, remote sensing researchers and forecasters are monitoring the environmental conditions fueling the powerful storm. They are assembling a suite of satellite images and data products that could aid storm preparedness and recovery efforts by federal and local partners.

As Florence approaches land, two key factors will help govern the severity of the storm: ocean temperatures and wind shear, the difference in wind speeds at upper and lower parts of a storm. Warm ocean water and low wind shear are required to sustain and intensify a hurricane.

The map above shows sea surface temperatures on September 11, 2018. Meteorologists generally agree that sea surface temperatures (SSTs) should be above 27.8°C (82°F) to sustain and intensify hurricanes (although there are some exceptions). In Florence’s case, National Hurricane Center forecasters expect the storm to pass over water with temperatures well above that threshold. The data for the map were compiled by Coral Reef Watch, which blends observations from the Suomi NPP, MTSAT, Meteosat, and GOES satellites and computer models. Information about the storm track and winds come from the National Hurricane Center.

Florence will be traveling over water that is anomalously warm for this time of year, noted Marangelly Fuentes, a NASA atmospheric scientist who has been tracking the storm with models maintained by NASA’s Global Modeling and Assimilation Office (GMAO). As the storm approaches land, sea surface temperatures off of the Carolinas were between 0.5 and 1.5 degrees Celsius warmer than usual.

However, the warm coastal water is not the only reason that the Carolinas may be hit by one of the strongest hurricanes to ever make landfall at such a northerly latitude in this region.“While it is common to see storms this strong or even stronger over the ocean at this latitude,” said Gary Partyka, another atmospheric scientist with GMAO. “What set this situation apart was an unusually strong blocking high north of the storm that directed it towards the United States. Usually with storms at this latitude large-scale circulation patterns drive them to the north and east, well away from the coast.”

Forecasters have warned that life-threatening storm surges, catastrophic flooding, damaging winds, and dangerous rip currents will likely occur along the coastlines of North Carolina, South Carolina, and Virginia when the storm arrives late on September 13. There is growing concern that the presence of another atmospheric blocking ridge in the Mid-Atlantic region may cause the storm to stall and possibly move south and west toward Georgia, potentially extending the amount of time it remains over warm water and increasing the rainfall totals.

With forecasters expecting prodigious amounts of rain, NASA’s Disasters Program has mobilized a team that will use NASA sensors to monitor soil moisture, soil saturation, and rainfall rates. During and after the storm, this team will produce and disseminate information about where satellites observe floods and other effects of the storm. For more awesome, frightening views of Hurricane Florence, see this story.