This oblique nighttime image, taken by an astronaut aboard the International Space Station, reveals Indonesia’s main island chain. With coasts illuminated by city lights, the islands stand out against the darkness of the Indian Ocean. The island of Java is the geographic and economic center of Indonesia. With a population of more than 141 million people, it is the world’s most populous island.

Java is part of the Greater Sunda Islands, a chain of active volcanoes that form an island arc. The volcanoes constrain the growth of populated areas and can be distinguished at night as a line of dark circles surrounded by city lights. These densely populated islands are at risk of volcanic eruptions, earthquakes, and tsunamis due to tectonic activity from the Sunda Subduction Zone that formed the islands.

The brightest urban area is Java’s port city of Surabaya, Indonesia’s second largest city and the capital of the province of East Java. The Port of Tanjung Perak, located at Surabaya, is Indonesia’s second busiest sea port. Ships arriving and departing transport over 33 million tons of cargo and 9 million people annually. Individual and clustered lights seen around Java are ships and fishing boats. The fishing boats emit bright lights of different colors to attract fish, squid, and plankton.

Astronaut photograph ISS056-E-6994 was acquired on June 9, 2018 with a Nikon D5 digital camera using a 28 millimeter lens, and is provided by the ISS Crew Earth Observations Facility and the Earth Science and Remote Sensing Unit, Johnson Space Center. The image was taken by a member of the Expedition 56 crew. The image has been cropped and enhanced to improve contrast, and lens artifacts have been removed. The International Space Station Program supports the laboratory as part of the ISS National Lab to help astronauts take pictures of Earth that will be of the greatest value to scientists and the public, and to make those images freely available on the Internet. Additional images taken by astronauts and cosmonauts can be viewed at the NASA/JSC Gateway to Astronaut Photography of Earth. Story by Sarah Deitrick, Jacobs, JETS Contract at NASA-JSC and Andrea Meado, Jacobs, JETS Contract at NASA-JSC.

The island of Java is the geographic and economic center of Indonesia. 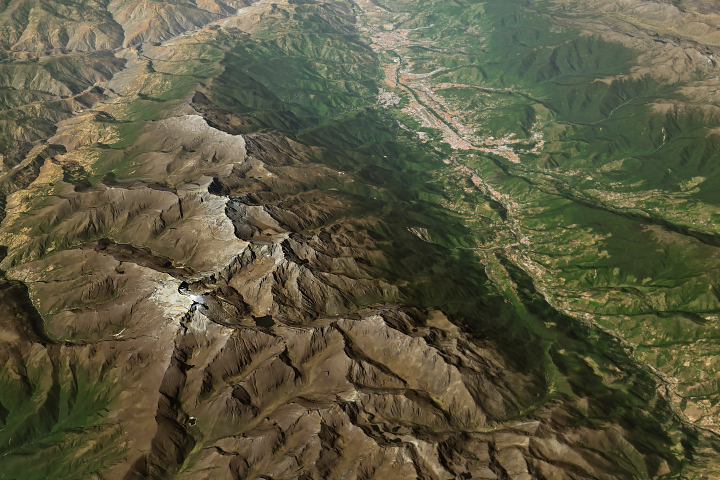