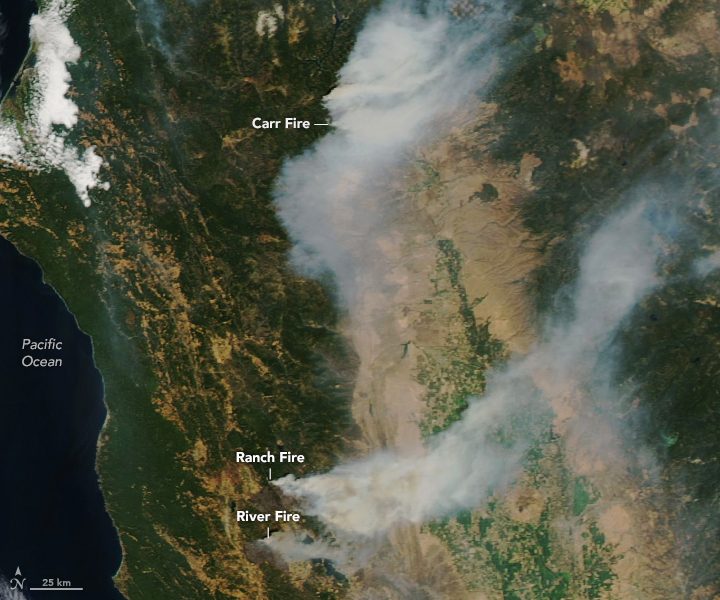 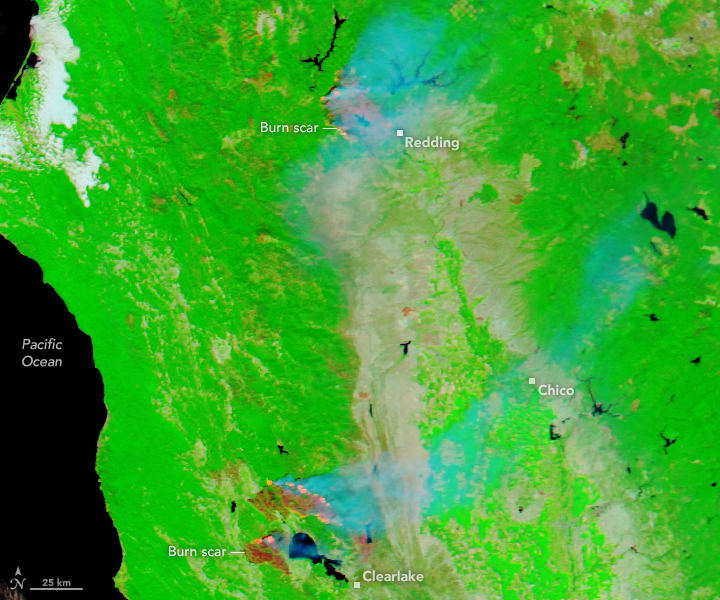 Wildfires continue to rage in Northern California and other parts of the American West. Thousands of firefighters are battling fires fueled by hot, mostly dry weather and strong winds.

On August 2, 2018, the Moderate Resolution Imaging Spectroradiometer (MODIS) on NASA’s Aqua satellite acquired these natural- and false-color images. The second image, which includes bands of shortwave infrared light, reveal the burn scars left in the wake of the fires. Use the image comparison tool to spot the details.

According to CalFire on the morning of August 3, the Carr Fire near Redding had burned 131,896 acres (nearly 200 square miles) and was 39 percent contained. The wildfire has destroyed more than a thousand homes and hundreds of other buildings. The fire is already the sixth most destructive in California history.

To the south, the River Fire consumed 41,512 acres and was 50 percent contained, while the nearby Ranch Fire has burned 112,226 acres and was 28 percent contained. Collectively, the Ranch and River fires—grouped by firefighting officials as the Mendocino Complex—have destroyed 41 homes and 47 other buildings, while threatening another 9,200 structures.

Several other NASA sensors acquired views of California and Nevada fires and smoke plumes this week. NASA’s Ecosystem Spaceborne Thermal Radiometer Experiment on Space Station (ECOSTRESS), which was just installed on the International Space Station in early July, got a view of surface temperatures around the fires. The Multi-angle Imaging SpectroRadiometer (MISR) instrument on NASA's Terra satellite collected data on July 27 and 29 revealing the height of aerosols and smoke as the plumes blew up and away from the fires. And the Visible Infrared Imaging Radiometer Suite (VIIRS) on the Suomi NPP satellite captured a nighttime view of the fires as they lit up the countryside early on August 3.

Almost a quarter of a million acres of land and more than a thousand homes have been consumed by three wildfires in Northern California.