Air Pollution on the Move in India 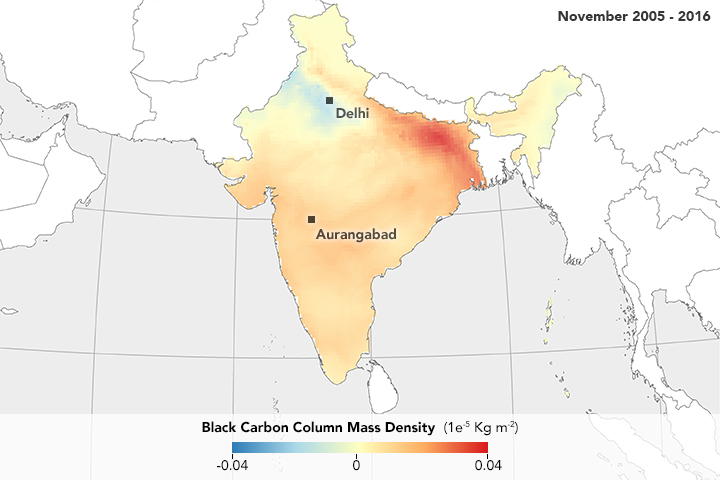 In recent decades, northern India has been plagued by a double-dose of air pollution due to nearby sources of desert dust and increasing amounts of airborne particles from human activities. New research suggests that winds are spreading the problem, moving some of the pollution southward in ever-increasing amounts.

Black carbon is one of several components of Indian air pollution described in new research led by Sudipta Sarkar of NASA’s Goddard Space Flight Center. Black carbon is a sooty black material that comes from the incomplete combustion of things like fossil fuels and vegetation and is easily transported by winds. It can cause respiratory and cardiovascular disease if inhaled, and it can also affect climate.

The map above, based on a model known as MERRA-2, shows how the amount of airborne black carbon, averaged for the month of November, has changed over a 12-year period from 2005 to 2016. Blue areas indicate where concentrations have decreased, while orange and red show increases.

Looking at the map, the increases in central India do not stand out compared to some other areas. They were, however, surprising. “We first looked at India’s capital, Delhi, which is in the news a lot for its air pollution problems,” Sarkar said. “When we looked at whole picture, we thought ‘wow, this is happening in areas to the south, too.’”

Ground-based measurements at sites including Aurangabad confirmed what the models indicated: increases in black carbon are affecting central India in November. So where is it coming from?

Sarkar and colleagues think that winds are likely the main way that this pollution is reaching central India from areas north. From mid-October through mid-November, after the monsoon, a ridge of atmospheric high pressure usually sets up over northwestern part of the country. As a result, winds during this time usually blow from northern states toward the south and east, carrying fine pollution particles from the northwest.

“Mechanical harvesting in Punjab has increased and spread to other states, so the cumulative effect is increasing with every passing year,” Sarkar said. Specifically, black carbon values over central and southern India in November increased by as much as 60 percent over the 12-year period.

Sarkar notes that there was a hint of improvement downwind after regulations were put into effect in Punjab in 2017, but researchers will need a few more years of data before they can say for sure.

Wind patterns in October and November each year carry air pollution from northern India to central parts of the country.