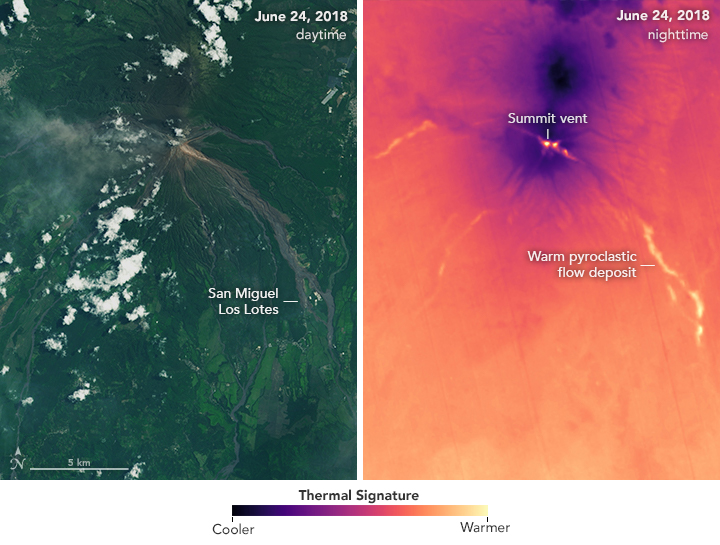 On June 3, 2018, torrents of hot ash, rock, and gas poured down ravines and stream channels on the slopes of Volcán de Fuego—Guatamala’s Volcano of Fire. More than three weeks after the eruption, the Landsat 8 satellite continued to detect elevated temperatures in some of the pyroclastic flow deposits.

The avalanches of volcanic debris swallowed hundreds of homes, killed more than 100 people, and injured thousands. As rain mixed with ash and rock in the weeks following the eruption, volcanic mudslides (lahars) sent debris tumbling down drainage channels on Fuego’s southern slope. In the natural-color image above, the pyroclastic flow and lahar deposits appear as tendrils of gray amidst the green, forested mountainside.

At the moment of eruption, the magma had a temperature of about 1000 degrees Celsius (1800 °F) Though the debris cooled rapidly in the rainy weather that followed the eruption, pyroclastic flow deposits in the Las Lajas drainage basin (southeast of the summit vent) remained 4 to 6 degrees warmer than the surrounding landscape when Landsat 8 passed over on June 24, 2018. Temperatures were also elevated in volcanic deposits in the Santa Teresa and Ceniza drainages. The former is west of the summit vent; the latter is southwest of the vent. In the thermal map above, warm areas appear bright and yellow; cooler areas are purple and blue. Undeveloped, higher-elevation areas with vegetation have lower land surface temperatures than lower-elevation developed areas.

“Fuego left pyroclastic flow deposits that cooled down quickly at the surface but are still very hot inside,” explained Michigan Technological University volcanologist Rüdiger Escobar-Wolf. “Cooling deposits can show surface temperatures above the background level for a long time—weeks, or even months. However, that temperature may be only slightly above the background level, as the heat from the interior slowly seeps out of the deposit to the surface.”

Though the warmest deposits are generally the thickest, the warmest deposits did not necessarily cause the most damage. For instance, the Guatemalan town that saw the highest number of deaths and the most destruction—San Miguel Los Lotes—does not stand out as a hot spot, possibly because of the search-and-rescue operations that occurred in that area. In the frantic aftermath of the eruption, rescue teams cooled volcanic debris by overturning and pouring water onto warm deposits as they searched for people that had gone missing.

It is possible that disaster response teams could use thermal data from Landsat or other satellites to aid in search-and-rescue efforts. “If an eruption happened at night, and officials were not sure of the distribution of pyroclastic flow deposits this kind of data could be used to help determine where to search for survivors,” said Escobar-Wolf. “Though you would have to have clear skies and a satellite overpass at just the right time.” Those requirements pose significant hurdles. Since the eruption, Landsat satellites have acquired five nighttime thermal infrared images of Fuego, but this is only the first clear one.

Thermal data has tremendous value for volcanologists conducting research on pyroclastic flows. “Getting measurements of the heat from the deposit can help us establish the initial temperature and tell us something about the origin of the flow,” said Escobar-Wolf. “It can also tell us something about how thick a deposit, which can initially be difficult to tell by looking at them in the field.” The lack of heat near the summit, for instance, indicates that the volcanic deposits visible in the natural-color image are actually quite thin.

This satellite image shows the remnants of a large pyroclastic flow on the slopes of Shiveluch Volcano.