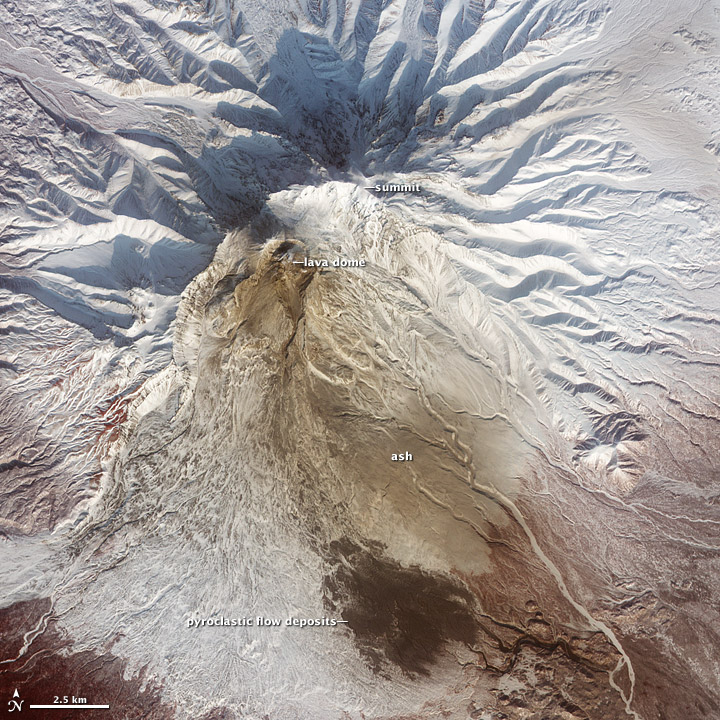 Pyroclastic flows are some of the most fearsome hazards posed by erupting volcanoes. These avalanches of superheated ash, gas, and rock are responsible for some of the most famous volcanic disasters in history, including the burial of the ancient Roman city of Pompei and the destruction of Saint-Pierre in 1902. More recently, pyroclastic flows from Mount Merapi in Indonesia caused most of the casualties during the volcano’s 2010 eruption.

The intense heat—over 1,000° Celsius (1800° Fahrenheit)—the terrific speed—up to 720 kilometers (450 miles) per hour—and the mixture of toxic gases all contribute to the deadly potential. Pyroclastic flows can incinerate, burn, or asphyxiate people who cannot get out of the flow path.

This false-color satellite image from the Advanced Spaceborne Thermal Emission and Reflection Radiometer (ASTER) on the Terra satellite shows the remnants of a large pyroclastic flow on the slopes of Shiveluch Volcano. Fortunately, no one was hurt during the eruption and flow in the sparsely-populated area.

ASTER detected heat from the flow during or shortly after an event on January 25, 2011. Note how the heat signatures from January line up with the dark surface deposits visible on February 25; those deposits cover more than 10 square kilometers (4 square miles). Light brown ash covers the snow above the flow deposits, and a tiny plume rises from Shiveluch’s growing lava dome. Vegetation surrounding the volcano is colored dark red.

This satellite image shows the remnants of a large pyroclastic flow on the slopes of Shiveluch Volcano.

Satellite image of the scars left behind by hot volcanic avalanches from Merapi Volcano, Indonesia.