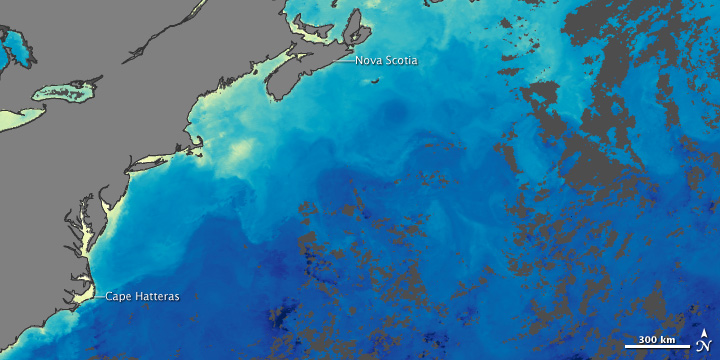 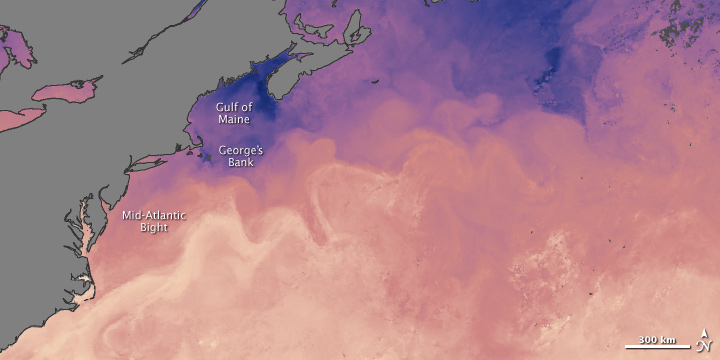 It is a general rule of the ocean that phytoplankton grow best where nutrients swirl up from the depths and where temperatures are on the cooler side. That doesn’t mean floating marine plants cannot grow in any waters, but the most bountiful feasts of phytoplankton—and therefore, the best fisheries—tend to be in cooler, well-mixed waters.

These images show one of those rich mixing basins: the northwest Atlantic Ocean. Based on data collected by the Moderate Resolution Imaging Spectroradiometer (MODIS) on NASA’s Aqua satellite, these maps show the concentration of chlorophyll (top) and sea surface temperatures (bottom) in the region from August 29 to September 5, 2010.

Measurements of chlorophyll, a green plant pigment, reflect where plant-like cells are floating near the surface. In the top image, more of those phytoplankton are blooming to the north, away from the steamy waters of the Gulf Stream. Note, too, the large curls and meanders in the Stream: Eddies typically spin off as the great current turns east toward Europe, though it’s possible Hurricane Earl could have contributed to the patterns.

Our new feature story—“As the Seasons Change, Will the Plankton?”—addresses the relationship between ocean currents, temperatures, and the health of phytoplankton:

The waters of the continental shelf and slope from Cape Hatteras to Nova Scotia are some of the most biologically productive in the world. They are also believed to be places where more carbon goes into the ocean than comes out of itâ€”known to climatologists as a carbon sink.

“It has been argued that the Mid-Atlantic Bight, Georges Bank, and Gulf of Maine will be particularly sensitive to climate change, given the confluence of warm waters from the south and colder waters from the north,” said oceanographer Dennis McGillicuddy of the Woods Hole Oceanographic Institution. “As global climate changes, this highly dynamic region is likely to fluctuate, teaching us valuable lessons about how ecosystems respond to changes.”

Some scientists have theorized that as air and ocean temperatures rise, productivity will decline because many of the better-known species grow best at temperatures that might be eclipsed. Warmer ocean temperatures also could increase the stratification, or layering, of the water column, which would inhibit the flow of nutrients up from the depths. Like land plants, plankton need nutrients to grow.

Several research groups have detected declines in phytoplankton growth and abundance. But that doesn’t match the preliminary findings from Margaret Mulholland, Antonio Mannino, and Kimberly Hyde, who are looking close-up at the waters on the continental shelves—where climate variability and human disruptions are most intensely felt.

Read more about efforts to understand the interplay of temperatures, carbon, and plankton in the sea.

NASA Earth Observatory images by Robert Simmon, based on data from the GSFC Ocean Color team. Caption by Mike Carlowicz.