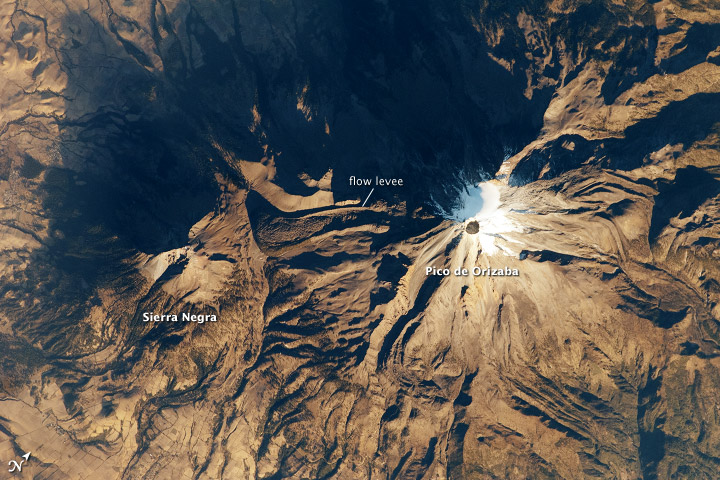 The snow- and ice-clad peak of Pico de Orizaba (also known as Citlaltépetl) boasts a summit elevation of 5,675 meters (18,620 feet) above sea level, making it both the highest peak in Mexico and the tallest volcano in North America. It is also one of three volcanic peaks in Mexico—together with Popocatepetl and Iztaccíhuatl—that retain summit glaciers. Pico de Orizaba is part of the Trans-Mexican Volcanic Belt that extends roughly east-west across Mexico. The last recorded eruption took place in 1846. While the volcano is considered dormant at present, geologists continue to investigate the potential hazards associated with a renewal of activity.

Shadows accentuate several features of the Pico de Orizaba, a stratovolcano, visible in this astronaut photograph from the International Space Station. The 300-meter (1,000-foot)-deep summit crater is clearly visible against surrounding ice and snow cover near image center. Several lava flows extend down the flanks of the volcano, made readily visible by prominent cooling ridges along their sides known as flow levees. One of the most clearly visible examples is located on the southwest flank of the cone.

The extinct Sierra Negra volcano to the southwest has a summit elevation of 4,640 meters (15,225 feet) above sea level; while not as lofty as Pico de Orizaba, it is also one of Mexico’s highest peaks.

Astronaut photograph ISS026-E-25437 was acquired on February 10, 2011, with a Nikon D2Xs digital camera using a 400 mm lens, and is provided by the ISS Crew Earth Observations experiment and Image Science & Analysis Laboratory, Johnson Space Center. The image was taken by the Expedition 26 crew. The image in this article has been cropped and enhanced to improve contrast. Lens artifacts have been removed. The International Space Station Program supports the laboratory as part of the ISS National Lab to help astronauts take pictures of Earth that will be of the greatest value to scientists and the public, and to make those images freely available on the Internet. Additional images taken by astronauts and cosmonauts can be viewed at the NASA/JSC Gateway to Astronaut Photography of Earth. Caption by William L. Stefanov, NASA-JSC.