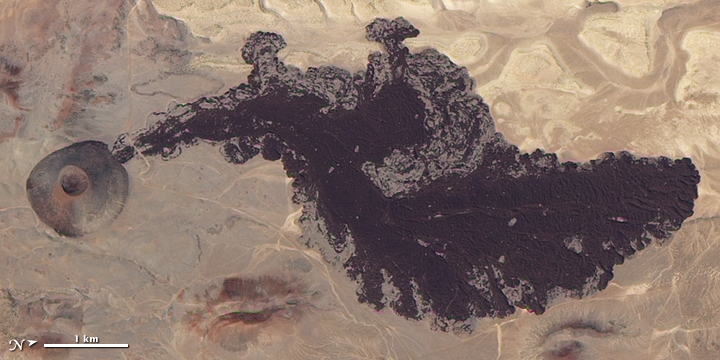 The San Francisco Volcanic Field lies not near the city of the same name but in northern Arizona. Covering 1,800 square miles (roughly 4,700 square kilometers), the volcanic field consists of volcanoes and lava flows, including SP Crater. The Advanced Land Imager (ALI) on NASA’s Earth Observing-1 (EO-1) satellite captured this natural-color image on April 17, 2010.

SP Crater is a cinder cone, a conical structure made up of volcanic fragments, often glassy rocks containing bubbles of trapped gas. Cinder cones often form around or downwind from volcanic vents. When lava erupts from these structures, it frequently flows out of breaches on the side, and that appears to be the case at SP Crater. Like most volcanoes in this field, SP Crater is a basalt cinder cone. Basalt has low resistance to flow, so basalt lava flows tend to travel fairly far from the eruption source.

Forming a paisley pattern, the dark volcanic rocks north of SP Crater result from lava flows. (This image has been rotated and north is at right.) The hardened lava extends some 4 miles (6 kilometers) from the cinder cone, and is about 100 feet (30 meters) thick. Different dating techniques have placed the age of this lava between 4,000 and 71,000 years old.

According to the U.S. Geological Survey, more than 600 volcanoes occur in the San Francisco Volcanic Field, and they have erupted at various times over the past 6 million years. Although ancient by human standards, these volcanoes are in fact geologically young.