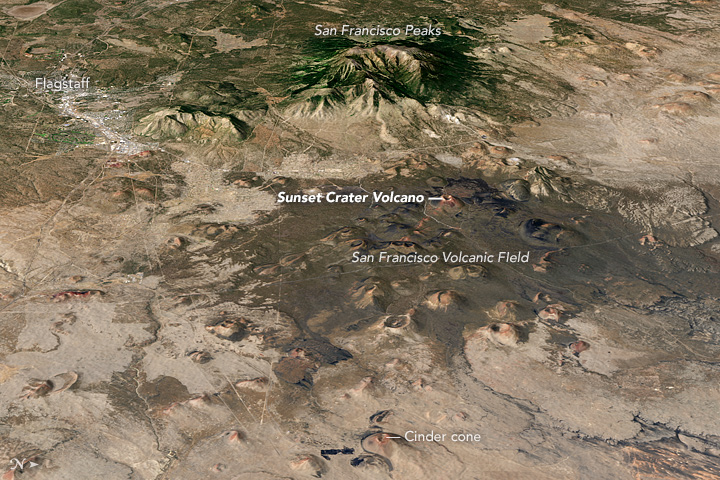 During its creation about a thousand years ago (1085 C.E.), explosions rocked Sunset Crater. The emerging volcano buried the landscape in a thick, dark carpet of lava and ash. Much of the evidence of that eruption is still visible today.

During a series of eruptions, magma rose to the surface through a vent, creating the cinder cone that still rises more than 1,000 feet (300 meters) over the surrounding area. The crater draws its name from the fiery orange rings of earth that surround its cone. These deposits contain sulphur and iron, which oxidizes (rusts) and turns red with exposure to air and water. Today, trees and bushes grasp for a foothold in the volcanic rock and dark soil around the crater.

On July 12, 2016, the Operational Land Imager (OLI) on the Landsat 8 satellite captured a natural-color image (above) of the crater and the surrounding San Francisco Volcanic Field. The image was draped over terrain data from the Advanced Spaceborne Thermal Emission and Reflection Radiometer (ASTER). Note: the scene was rotated to create this image, so north is to the right. The closeup below shows Sunset Crater as observed by OLI, but without the terrain drape (north is up). To the east of the cone, a field of dark, hardened rock from the Bonita Lava Flow is still visible. 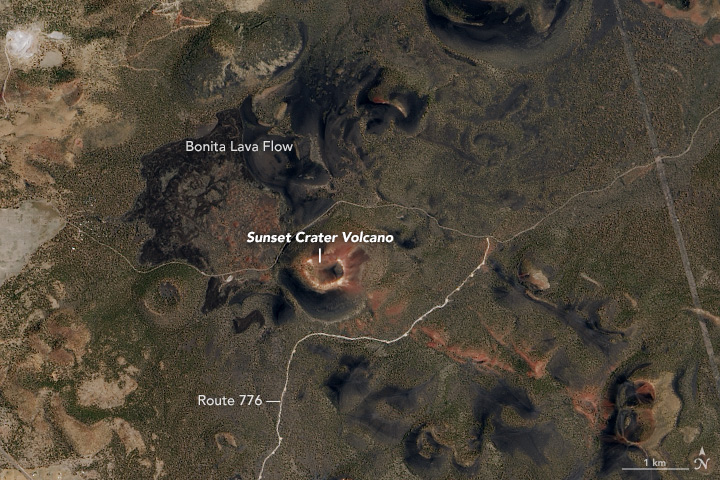 In the 20th century, the crater was almost swept away by an explosion of another kind. In 1928, Hollywood producers attempted to blast Sunset Crater in order to create a landslide for a film. In the wake of the incident, local citizens pushed for government protection of the orange-topped hill, which was drawing thousands of tourists to the area. President Herbert Hoover established a national monument at the site, north of Flagstaff, Arizona, on May 26, 1930.

Sunset is the youngest in an aggregation of more than 600 volcanoes in the San Francisco Volcanic Field, according to the U.S. Geological Survey. The field covers roughly 1,800 square miles (4,600 square kilometers), and many of its volcanoes formed over the course of months to years.