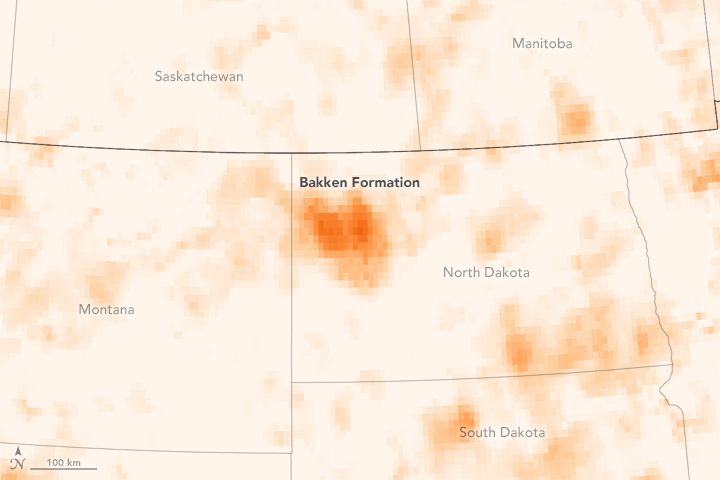 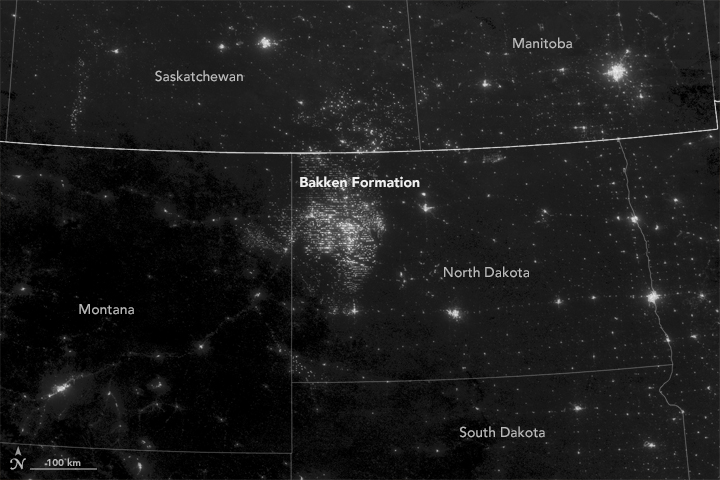 Researchers have suspected for several years that the flaring of waste natural gas from industrial oil and gas fields in the Northern Hemisphere could be a significant source of nitrogen dioxide and black carbon pollution in the Arctic. Research from a NASA-sponsored study lends new weight to that hypothesis.

Nitrogen dioxide is a well-known air pollutant that is central to the production of ground-level smog and ozone. It is closely associated with black carbon (also known as soot), which is an agent of global warming, particularly in the Arctic. In addition to absorbing sunlight while aloft, black carbon darkens snow when it settles on the surface. Both processes lead to heating of the air and the land surface, accelerating the melting of snow and ice.

The amount of black carbon that reaches the Arctic is poorly estimated, but scientists know that any soot could have a significant impact. “The Arctic starts from a very clean state, as there are no significant local sources of dust or smoke pollution,” said Nickolay Krotkov, an atmospheric scientist at NASA’s Goddard Space Flight Center and a member of a team examining the origins of Arctic black carbon. “In this kind of pristine environment, even small anthropogenic sources make a big difference.”

Previous research has suggested that gas flares from oil and natural gas extraction near the Arctic could be a key source of black carbon. But since international inventories of industrial emissions have gaps in observations and in reporting, they often over- or underestimate the amount of pollutants.

Gas flares are an often-overlooked subset in that already messy data set. Regional estimates from Russia, for example, suggest that gas flaring may account for 30 percent of all black carbon emissions. But with few monitoring stations near flaring sites, the scientific community has had great difficulty getting accurate estimates of emissions.

Can Li and other researchers at NASA Goddard were recently asked by atmospheric modelers to see if they could provide flaring estimates based on satellite data. Black carbon levels in the atmosphere cannot be directly measured by satellites, but they can be derived indirectly. Black carbon is associated with nitrogen dioxide and with the total concentration of aerosol particles in the atmosphere. Nitrogen dioxide and black carbon particles are often produced at the same time when fossil fuels are burned.

The modelers were simulating the trajectories of pollution through the atmosphere based on existing, flawed emission inventories. And their results generally underestimated the amount of black carbon reaching the Arctic compared to what scientists in the field were measuring directly.

For each study site, Li and Krotkov analyzed nitrogen dioxide data from the Ozone Monitoring Instrument aboard the Aura spacecraft. A sample is shown at the top of this page. Fellow NASA researchers Andrew Sayer and Christina Hsu retrieved aerosol concentration data from the Moderate Resolution Imaging Spectroradiometer aboard NASA’s Aqua satellite.

“We found a pretty good match-up between the gas flare signals from the night lights and the nitrogen dioxide retrievals for two regions—Bakken and the Canadian oil sands,” said Li. (Turn on the image comparison at the top of this page.) Every year from 2005 to 2015, the levels of atmospheric NO2 rose about 1.5 percent per year at Bakken and about 2 percent per year at Athabasca. This means the concentration of black carbon produced by those flares was also likely on the rise.

Aerosol data were less conclusive. Aerosols tend to linger in the atmosphere longer than nitrogen dioxide, making it more difficult to establish whether there was an increase due to oil field activities, as opposed to general background levels, Sayer said.

The new observational results fit well with modeling done by Joshua Fu, an atmospheric modeler at the University of Tennessee at Knoxville and a collaborator on the paper. When Fu and colleagues added the gas flare locations and estimated emissions into a model of chemical transport in the atmosphere, they were able to reproduce the amount of black carbon observed in the Arctic by ground stations and aircraft.