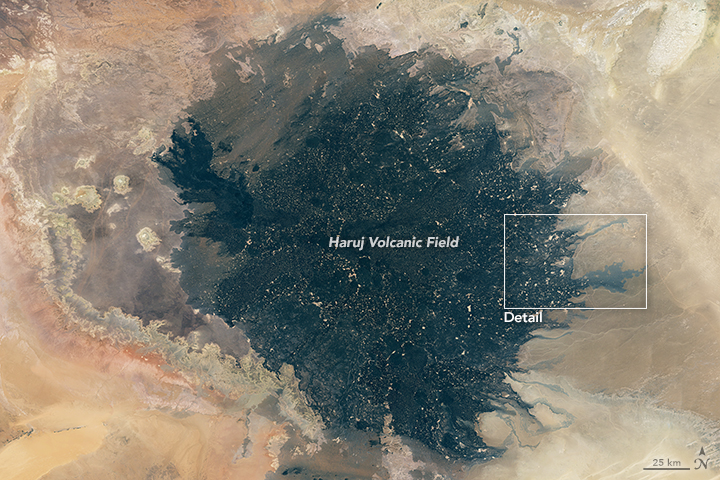 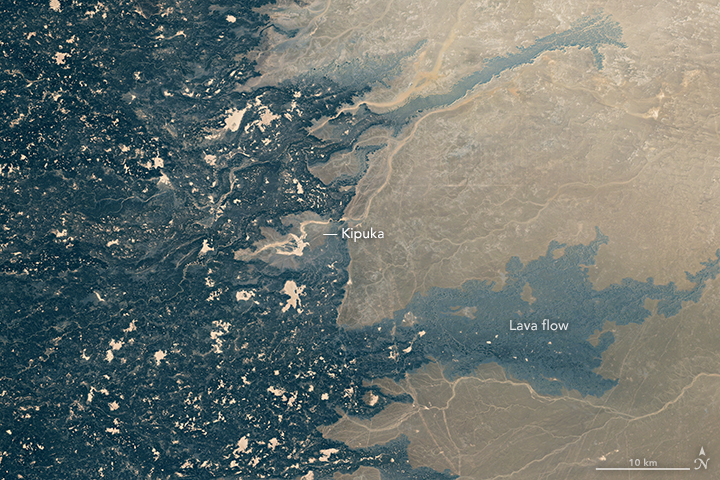 From above, the Haruj volcanic field in central Libya offers a startling contrast to the brighter sand that dominates the surrounding desert landscape. Jet black layers of basalt spread across a 45,000-square-kilometer (17,000-square-mile) plateau. They stand as evidence of a time when volcanic eruptions regularly sent lava spilling across the surface.

The volcanic field contained more than 120 vents, including small shield volcanoes, spatter cones, and cinder cones. In most cases, the lava that spilled from these vents was fluid and not explosive, much like the lava produced by ongoing eruptions in Hawaii.

The image of Haruj at the top of the page is a “best-pixel mosaic” based on data captured by the Operational Land Imager (OLI) on Landsat 8 between July 24, 2013 and April 13, 2016. Rather than using data collected at one moment, Earth Observatory data visualizers used an algorithm to sort, pixel by pixel, through all the imagery available during that period to select pixels that were not affected by clouds, dust, or other atmospheric phenomena that might alter the appearance of a surface feature.

The lower image shows a more detailed view of lava flows along the eastern edge of the volcanic field. Geological research suggests that these flows, which moved from west to east, were produced during five phases over a five-million-year period in the beginning of the Pliocene. The patches of tan scattered across the basalt are depressions filled with fine-grained sand. Many of these depressions are kipuka (called balta locally)—land that has been completely surrounded, but not covered, by a younger lava flow.