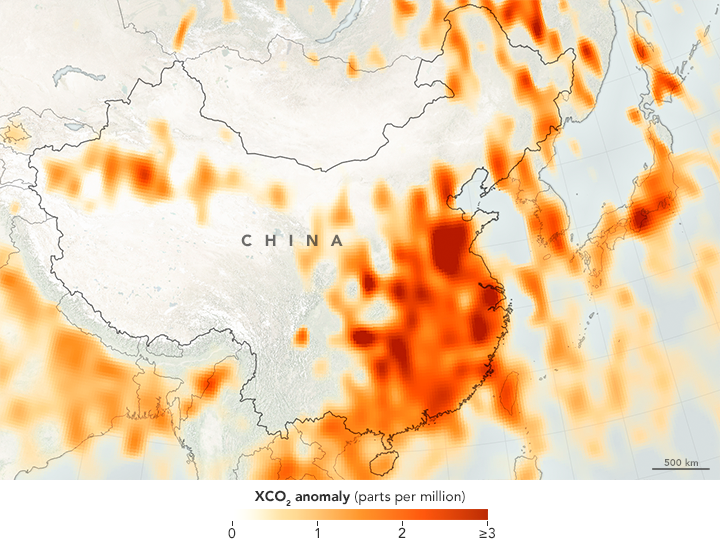 Launched in July 2014, NASA’s Orbiting Carbon Observatory-2 (OCO-2) was designed to give scientists comprehensive, global measurements of carbon dioxide in the atmosphere. Now a team of scientists has used that satellite data to identify a human signal amid the seasonal fluctuations of the greenhouse gas.

For decades, ground-based observatories have been measuring CO2, and those measurements have been steadily climbing. The atmospheric concentration of carbon dioxide now averages more than 400 parts per million, year-round, which is more than one third higher than CO2 levels before modern industrialization and fossil fuel use began.

Ground stations have provided a broad view of carbon in the atmosphere, and other models and estimates (such as economic data) have filled in some details. Even a few satellites have offered short-term or regional glimpses of CO2 patterns. But past efforts have been limited in various ways: by the inability to collect measurements over the oceans; by a lack of resolution or methodical measurement from space-based instruments; and by incomplete reporting by countries and companies monitoring the gas. Most of all, past measurements could not necessarily pinpoint the sources of carbon dioxide. 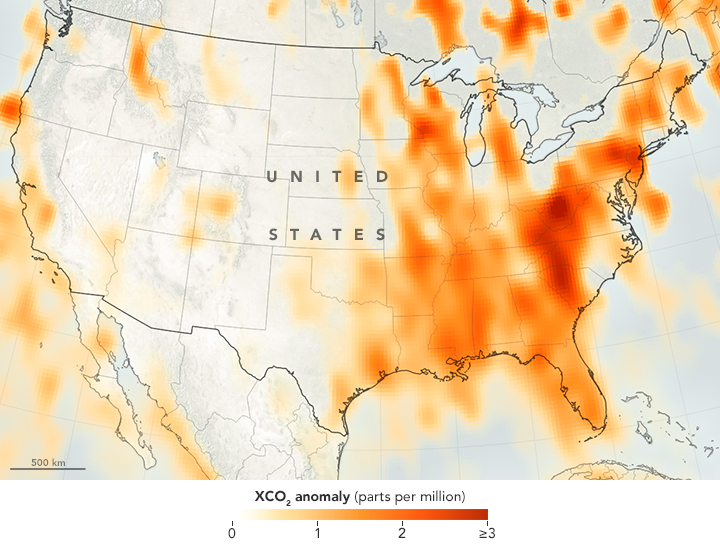 Various studies and models have determined that humans release about 40 billion tons of carbon dioxide into the atmosphere each year. But where, exactly, are those emissions coming from today? A group of scientists from the Finnish Meteorological Institute (FMI) have used OCO-2 data to make satellite-based maps of human emissions of carbon dioxide. Those satellite observations match well with ground-based estimates.

The maps on this page depict carbon dioxide anomalies in the atmosphere; that is, places where CO2 levels were higher than the normal fluctuations that occur with the seasons. They are based on work published in November 2016 by Janne Hakkarainen and colleagues at FMI. The maps depict widespread carbon dioxide around major urban areas, as well as some smaller pockets of high emissions. The highest values in the study were observed over eastern China, with other hot spots in the eastern United States, Central Europe, the Middle East, and Japan.

“OCO-2 can even detect smaller, isolated emitting areas like individual cities. It’s a very powerful tool that gives new insight,” said Hakkarainen, the atmospheric scientist at FMI who led the study. “One of the most interesting findings was to see a strong signal over Middle East that is not present in emission inventories—suggesting that the inventories might be incomplete over that area.” (Note that the Middle East map does not show data east of Iran because calculations have not yet been made for those areas.) 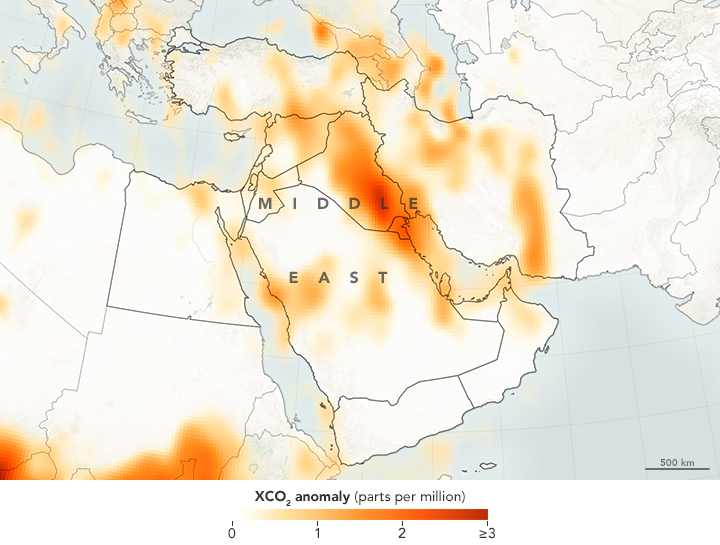 Carbon dioxide molecules linger in the atmosphere for a century or more, so much of what OCO-2 observes is greenhouse gas that was emitted and accumulated years ago. The amount also fluctuates with the seasons, as plants and phytoplankton soak up more carbon during spring and summer and less in the winter.

The human fingerprint in any given year is relatively small. “Human emissions within the past year may add only something like three parts per million to that total,” Hakkarainen noted. The challenge was to isolate the recent manmade emissions from natural cycles and long-term accumulations.

The researchers analyzed and processed OCO-2 data to account for seasonal changes, as well as the background level (already near 400 parts per million). That left them with the signal of emissions from motor vehicles, power plants, and other industrial processes. But to be sure their signal was true, the team turned to another sensor, the Ozone Monitoring Instrument (OMI) on NASA’s Aura satellite. Built by a Dutch-Finnish team, OMI can measure nitrogen dioxide, another gas emitted during fossil fuel combustion. Carbon detections from OCO-2 lined up with NO2 detections by OMI, confirming the extra carbon dioxide was a result of human activities.

“This is a first step to realizing the potential of the OCO2 data,” said Gavin Schmidt, director of NASA’s Goddard Institute for Space Studies. He was not involved in the study. “This provides a baseline against which future changes and variability can be assessed.” 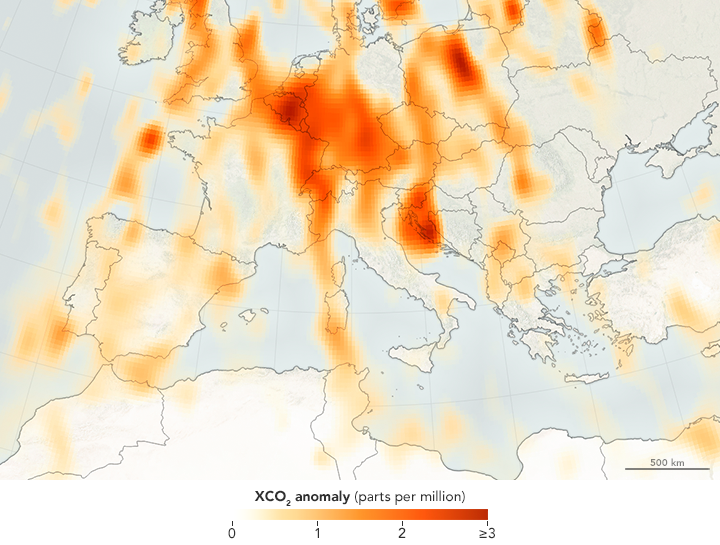