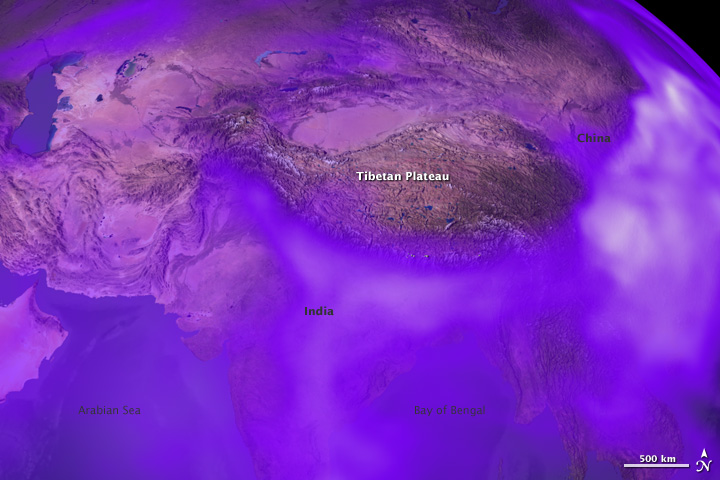 On the Tibetan Plateau, temperatures are rising and glaciers are melting faster than climate scientists would expect based on global warming alone. A recent study of ice cores from five Tibetan glaciers by NASA and Chinese scientists confirmed the likely culprit: rapid increases in black soot concentrations since the 1990s, mostly from air pollution sources over Asia, especially the Indian subcontinent. Soot-darkened snow and glaciers absorb sunlight, which hastens melting, adding to the impact of global warming.

NASA climate scientists combine satellite and ground-based observations of soot and other particles in the air with weather and air chemistry models to study how the atmosphere moves pollution from one place to another. This image is from a computer simulation of the spread of black soot (“black carbon” to climate scientists) over the Tibetan Plateau from August through November 2009. It shows black carbon aerosol optical thickness on September 26, 2009. (Aerosol optical thickness is scale that describes how much pollution was in the air based on how much of the incoming sunlight the particles absorbed.) Places where the air was thick with soot are white, while lower concentrations are transparent purple.

The highest concentrations of black soot are in the right-hand side of the image, over the densely populated coastal plain of China. But high concentrations occur over India, as well, and the black soot spreads across the southern arc of the Tibetan Plateau, which is defined by the towering peaks of the Himalaya Mountains. (Note: Topography has been exaggerated to highlight features that influence air movement). The animation shows how the black carbon pollution from India often circulates at high concentrations for several days against the base of the Himalaya, periodically “sloshing” over the rim of the mountains and spilling northward over the plateau, before being carried away over the Bay of Bengal or the Arabian Sea.

Writing about the implications of the study for the Goddard Institute for Space Studies Website, NASA climate scientist and study co-author James Hansen said, “[C]ontinued, ‘business-as-usual’ emissions of greenhouse gases and black soot will result in the loss of most Himalayan glaciers this century, with devastating effects on fresh water supplies in dry seasons. The black soot arises especially from diesel engines, coal use without effective scrubbers, and biomass burning, including cook stoves. Reduction of black soot via cleaner energies would have other benefits for human health and agricultural productivity. However, survival of the glaciers also requires halting global warming, which depends upon stabilizing and reducing greenhouse gases, especially carbon dioxide.”

Air Pollution on the Move in India

Wind patterns in October and November each year carry air pollution from northern India to central parts of the country.