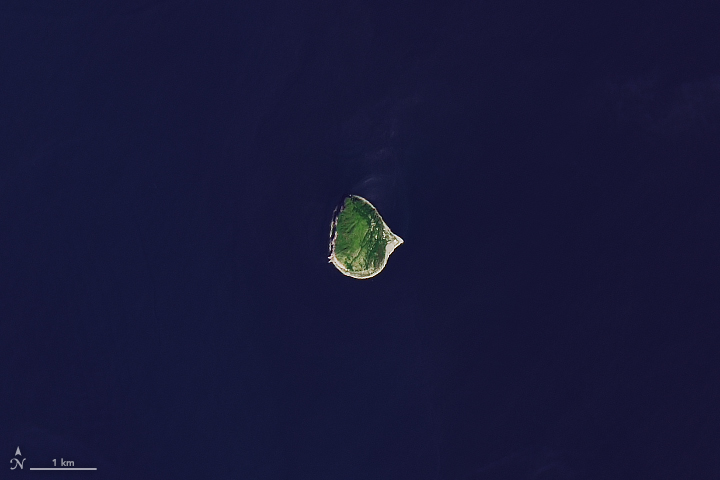 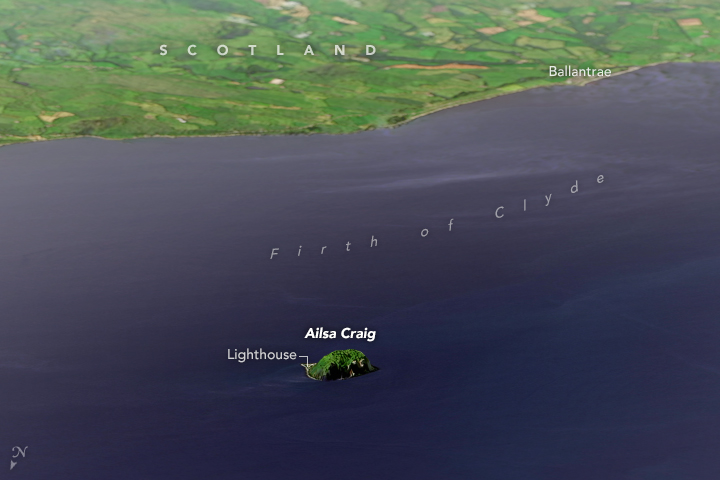 It has been a haven and sanctuary for pirates, smugglers, and religious dissenters. The Romans may have set up camp on this rock, and Catholic Spaniards and British and Scottish soldiers built a castle and other military garrisons on it. Prisoners were sequestered here. But these days, the tiny islet is known for two things: seabirds and curling stones.

Ailsa Craig is a tiny volcanic isle—more specifically, a plug of dense granite leftover from a long-extinct volcano. It is located about 16 kilometers (10 miles) off the coast of southwestern Scotland, near the mouth of the Firth of Clyde. It is sometimes referred to as “Paddy’s Milestone” due to its location halfway between Glasgow and Belfast. The name Ailsa Craig roughly translates as “fairy rock” in Gaelic.

The Operational Land Imager (OLI) on Landsat 8 acquired the data for a natural-color image of Ailsa Craig on July 8, 2017. The second image shows that same data overlain on a digital elevation model to show the topography. For scale, the island is about 1.2 kilometers (0.75 miles) by 0.8 kilometers (0.5 miles), and it rises from sea level to an elevation of 340 meters (1,110 feet). With steep cliffs on nearly all sides, the only landing approach (by ship) to Ailsa Craig is from the east.

The island has no electricity, no potable water, no farmable land, and no current human inhabitants. There are a few rabbits and goats, and tens of thousands of birds. Held by an environmental trust, the craggy rock provides shelter for Europe’s largest colony of gannets and a substantial number of puffins. Razorbills, kittiwakes, herring gulls, shags, fulmars, and black-backed gulls also frequent the island.

The prize of Ailsa Craig is its rocks, which are sought after for the crafting of curling stones. Nearly all of the stones used in the Winter Olympics and Paralympics for the past century have been carved from rocks plucked from the tiny island. The ancient volcanic eruption produced rocks with a tight molecular structure—Ailsa Craig common green granite, Ailsa Craig blue hone granite, and Ailsa Craig red hone granite—that are water- and crack-resistant, and therefore perfect for sliding on ice and smacking into other stones.

The tiny islet is rich with history, but is now known for two things: seabirds and curling stones.