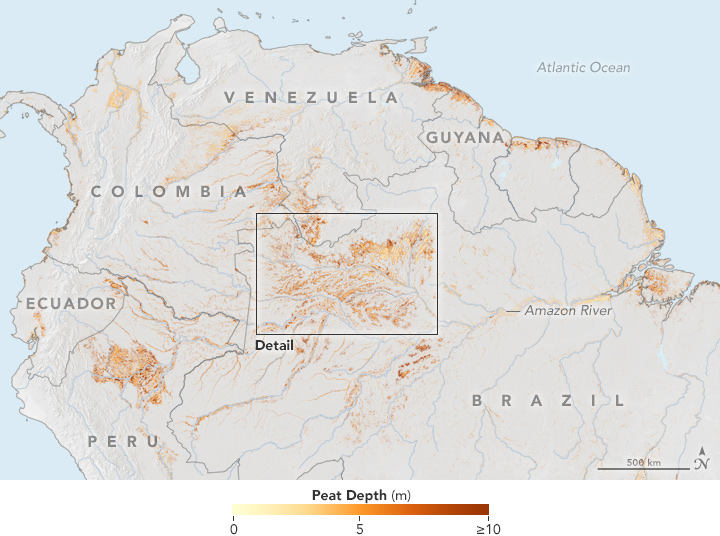 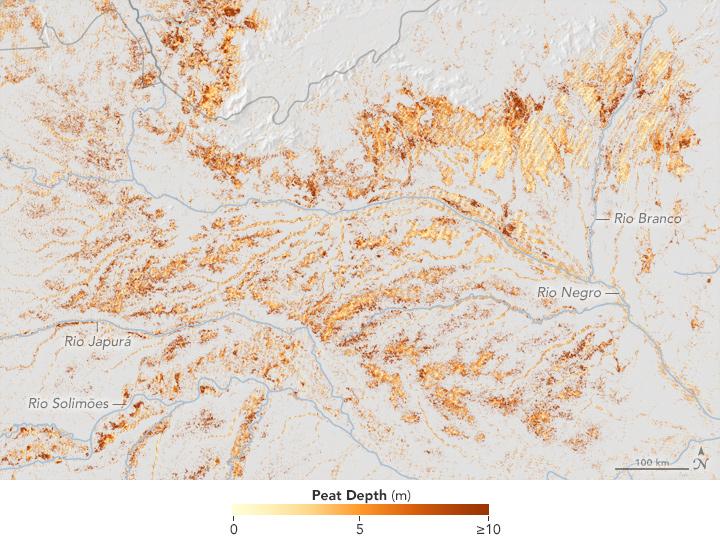 Peat is a soil-like mixture of partly decayed plant material that builds up in wetlands, swamps, and partly submerged landscapes. When it gets dried out or burned, it can be a significant source of greenhouse gases such as carbon dioxide and methane.

As the world continues to warm and human activities deplete and degrade wetlands and peatlands in many parts of the world, scientists and policymakers would like to have a better understanding of the volume of the world’s peat deposits. However, past estimates have varied significantly.

Earlier this year, researchers from the Sustainable Wetlands Adaptation and Mitigation Program offered new maps of peat extent and depth in the tropics. The scientists based their findings on a mixture of satellite, climate, and topographic data collected in 2011 that, when merged in a computer model, made it possible to generate better maps of the extent and depth of peatlands. The high resolution of the model meant they could identify peat-forming areas that were often omitted in previous mapping efforts—peat found under dense forest canopies, peat formed in areas that are only wet for part of the year, and other small deposits.

Using their new approach, the researchers concluded that South America accounts for 46 percent of the global total of tropical peat and holds more than Asia (previously considered to be the largest source). Brazil, not Indonesia, led the world in tropical peatland area, with the Amazon Basin being the largest contributor of tropical peat. They also found new hot spots in Africa, with ten times more peat than was reported in previous estimates.

The maps above shows peatland depth in South America. Areas with the deepest peat are shown with dark orange. Thinner deposits are shown with lighter shades of orange and yellow. Most of the new stores of peat were found to be in relatively shallow deposits in the Amazon basin, particularly along the Rio Negro and Rio Branco.

“The Rio Negro headwaters suffer from El Niño droughts, and large fires are known to affect the region. Some of these fires are likely affecting peat deposits, which would result in much larger greenhouse gas emission than previously thought for the region,” said Rosa Maria Roman-Cuesta, a Center for International Forestry Research (CIFOR) scientist involved in the project.

“Previous attention has focused on the peatlands in Southeast Asia, with estimates of the extensive areas of peatlands being in Indonesia and Malaysia,” one of the scientists noted in a blog post. “This new analysis shows that countries with under-reported peatland areas include Brazil, Peru, Venezuela, Colombia, Argentina, Colombia, China, India and Bangladesh.”

Areas mapped as having peat had to meet three conditions. They had to have enough water, according to rainfall and evapotranspiration data. A satellite sensor—the Moderate Resolution Imaging Spectroradiometer (MODIS)—had to observe wet surfaces for a prolonged period. And the terrain, based on information from the Shuttle Radar Topographic Mission, had to be able to retain water.

A mapping effort found a great deal of new peat in tropical areas.

Fires in the lowland (peat) forests of Borneo blanketed Indonesia with thick smoke on September 13, 2009.

Fires and Smoke in Sumatra