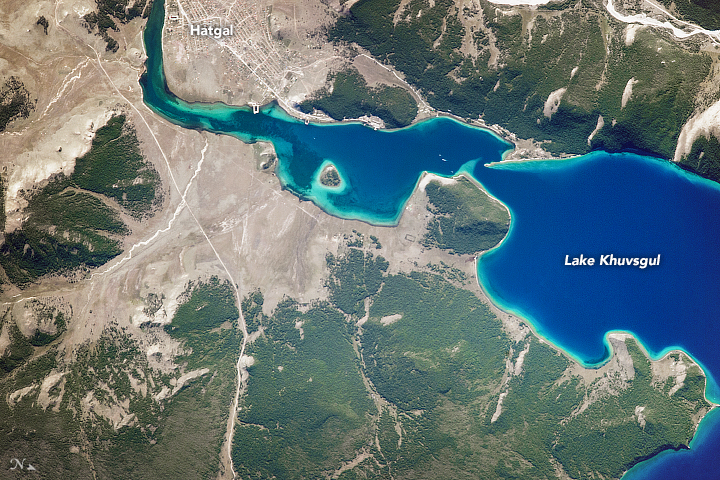 An astronaut on the International Space Station captured this photograph of the southern tip of Lake Khuvsgul (also known as Lake Hovsgol or Hovsgol Nuur) in north central Mongolia. Referred to as the “younger sister” of Lake Baikal, Khuvsgul is approximately 137 kilometers (85 miles) long and is the largest fresh water lake in Mongolia by volume. (Note that north is to the lower right in this image.)

Several rivers and streams flow down from higher elevations (including the Sayan Mountains) and into Lake Khuvsgul. The Egiin River is the only outflow, ultimately carrying water to Lake Baikal through the Selenga River. Together, the two lakes hold more than 20 percent of Earth’s fresh surface water.

The different shades of blue indicate different water depths—the deeper the blue, the deeper the water. Boreal forests (also referred to as taiga) cover the mountain slopes, while several streams cut through the forest and flow into the lake. Hatgal, a village with less than 4,000 inhabitants, sits on the lake shore and makes up most of the population in Khuvsgul Province. The lake and its surroundings are part of 11,803 square kilometers (4,557 square miles) of protected land designated as Lake Hovsgol National Park.

Astronaut photograph ISS052-E-45462 was acquired on August 12, 2017, with a Nikon D4 digital camera using an 1150 millimeter lens, and is provided by the ISS Crew Earth Observations Facility and the Earth Science and Remote Sensing Unit, Johnson Space Center. The image was taken by a member of the Expedition 52 crew. The image has been cropped and enhanced to improve contrast, and lens artifacts have been removed. The International Space Station Program supports the laboratory as part of the ISS National Lab to help astronauts take pictures of Earth that will be of the greatest value to scientists and the public, and to make those images freely available on the Internet. Additional images taken by astronauts and cosmonauts can be viewed at the NASA/JSC Gateway to Astronaut Photography of Earth. Caption by Andi Hollier, Texas State University, Hx5, JETS Contract at NASA-JSC. 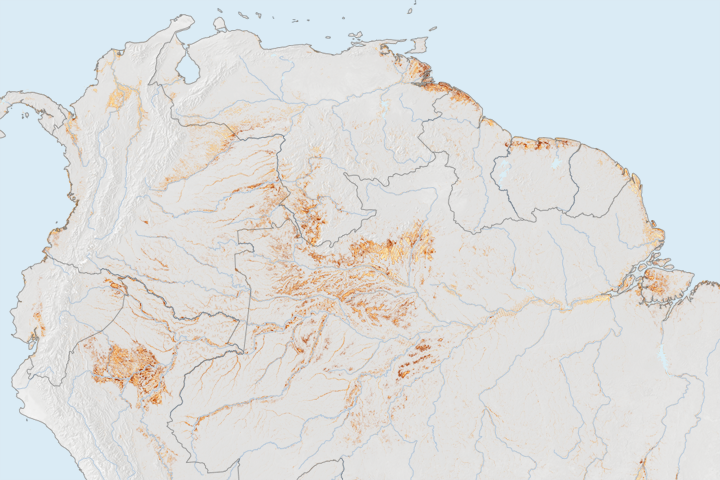