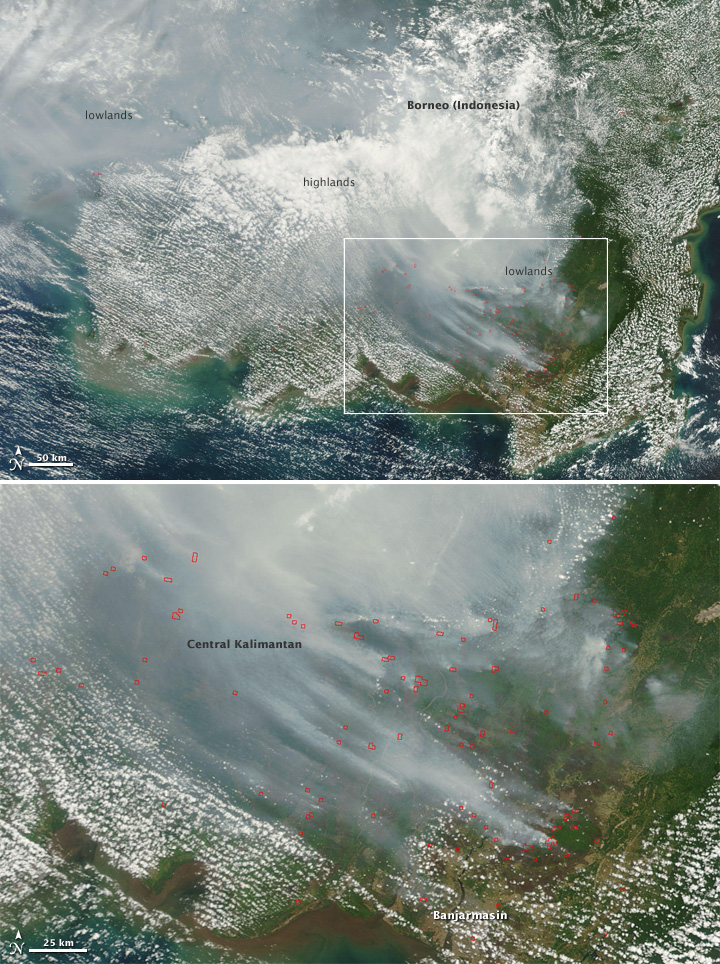 The highlands of Central Kalimantan province in Indonesian Borneo were hidden by clouds on September 13, 2009, when the Moderate Resolution Imaging Spectroradiometer (MODIS) on NASA’s Terra satellite captured this image, but the lowlands to the northwest and southeast were shrouded with thick, gray smoke. MODIS detected dozens of fires (locations outlined in red) in the swampy, low-lying area north of the city of Banjarmasin, the capital of Central Kalimantan.

Widespread burning in lowland forests on Borneo is an annual, manmade occurrence. People use fires to manage and create agricultural lands, including large palm tree plantations that supply palm oil for biodiesel fuel; others are set accidentally during activities like logging. Lowland tropical forests are underlain by a swampy layer of peat that can be up to 20 meters (66 feet) thick. During the rainy season, when the peat is waterlogged, leaves and other organic matter in the soil don’t decay; when the peat dries out, it becomes flammable. Burning peat generates huge amounts of smoke.

These fires can contribute significantly to annual greenhouse gas emissions, especially during El Niño years. During El Niño events, Indonesia usually experiences below-average rainfall that can escalate to widespread drought. As the swampy lowland forests dry out, accidental and intentional fires can quickly get out of control. During the 1997-98 El Niño, out-of-control fires burned an more than a million hectares (2.5 million acres) of peat forests in Indonesia (including Borneo, Sumatra, and Indonesian New Guinea). Using satellite data of fire activity, scientists estimated that the smoke from those fires accounted for somewhere between 13-40 percent of total human greenhouse gas emissions that year.

Twice-daily images of Borneo and Sumatra are available from the MODIS Rapid Response Website.

Fires in the lowland (peat) forests of Borneo blanketed Indonesia with thick smoke on September 13, 2009.

Thick smoke covered much of Borneo in September 2009.