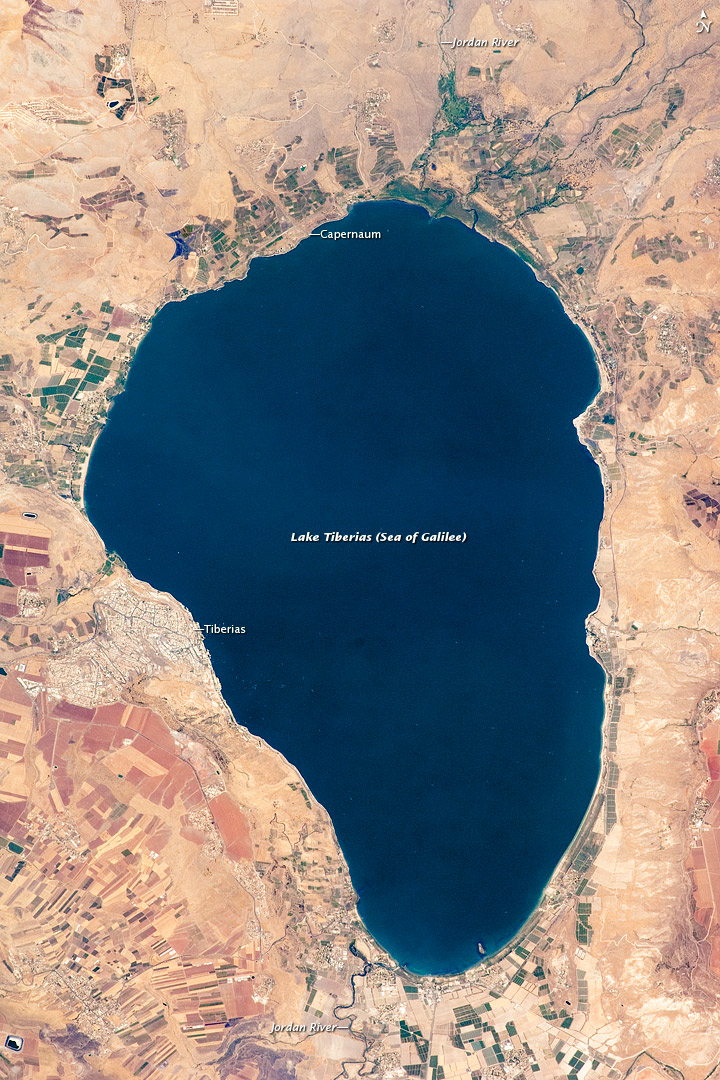 Israel’s largest freshwater lake, Lake Tiberias, is also known as the Sea of Tiberias, Lake of Gennesaret, Lake Kinneret, and the Sea of Galilee. The lake measures just more than 21 kilometers (13 miles) north-south, and it is only 43 meters (141 feet) deep. The lake is fed partly by underground springs related to the Jordan sector of the Great Rift Valley, but most of its water comes from the Jordan River, which enters from the north. The river’s winding course can be seen draining the south end of the lake at image bottom.

Angular green and brown field patterns clothe most hillsides in this arid landscape. Bright roof tops are the hallmark of several villages in the area. The largest grouping of bright roofs and city blocks indicates the location of Tiberias (named for the Roman Emperor Tiberius), visible at image left on the southwestern shore of the lake. War, earthquakes, and even a flood in 1934 have resulted in heavy damage to the town in the last 2,000 years, but it is now Israel’s most popular holiday destination.

Ruins of the famous biblical town of Capernaum, re-discovered in 1838 by the American explorer Edward Robinson, lie just north of Tiberias on the northwestern shore of Lake Tiberias. Excavations have revealed a synagogue from the fourth or fifth century, making it one of the oldest in the world.

Astronaut photograph ISS020-E-31066 was acquired on August 15, 2009, with a Nikon D2Xs digital camera fitted with an 400 mm lens, and is provided by the ISS Crew Earth Observations experiment and Image Science & Analysis Laboratory, Johnson Space Center. The image was taken by the Expedition 20 crew. The image in this article has been cropped and enhanced to improve contrast. Lens artifacts have been removed. The International Space Station Program supports the laboratory to help astronauts take pictures of Earth that will be of the greatest value to scientists and the public, and to make those images freely available on the Internet. Additional images taken by astronauts and cosmonauts can be viewed at the NASA/JSC Gateway to Astronaut Photography of Earth. Caption by M. Justin Wilkinson, NASA-JSC.

This astronaut photo of Israel’s Lake Tiberias (Sea of Galilee) shows an irregular patchwork of green and brown fields surrounding the lake. The Jordan River is visible flowing in at the northern end of the lake and out at the southern end.