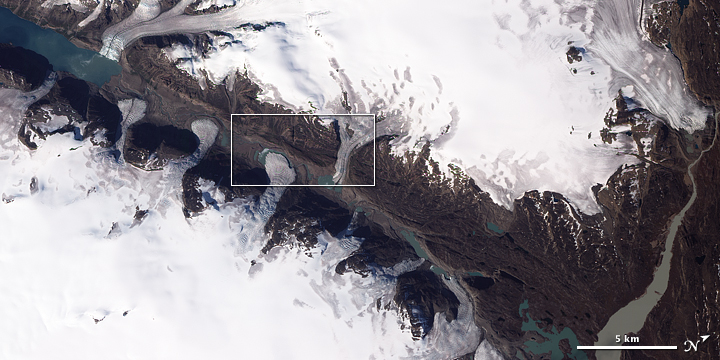 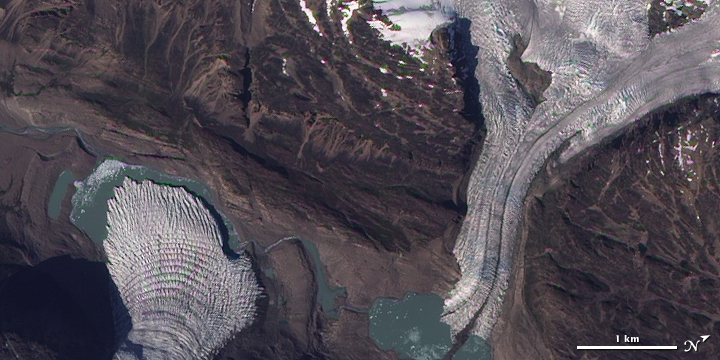 Small glaciers spill into a mostly dry valley in western Greenland in this picture from August 29, 2009. The Advanced Land Imager (ALI) on NASA’s Earth Observing-1 (EO-1) satellite acquired this natural-color image. The top view shows the wider area and the bottom view is a close-up of two glacier snouts.

The close-up image allows a clear view of both snouts’ rough surfaces. While ice at the bottom of a glacier generally flows smoothly, the ice overhead is often brittle. As a result, the glacier’s movement causes ruptures on the ice surface, which can be exacerbated by surface melting. Foehn winds—warm, dry, down-slope winds—may contribute to glacier melt, and also keep the underlying valley mostly dry. The shallow, blue-green water in the valley bottom is likely laced with rock flour left over from earlier glacial grinding of Greenland’s rocks.

Multiple glaciers frequently flow into straight valleys in Greenland. The valleys result from earlier glaciations that carved the bedrock. The smaller glaciers that flow into the valley may take advantage of weak joints in the bedrock.