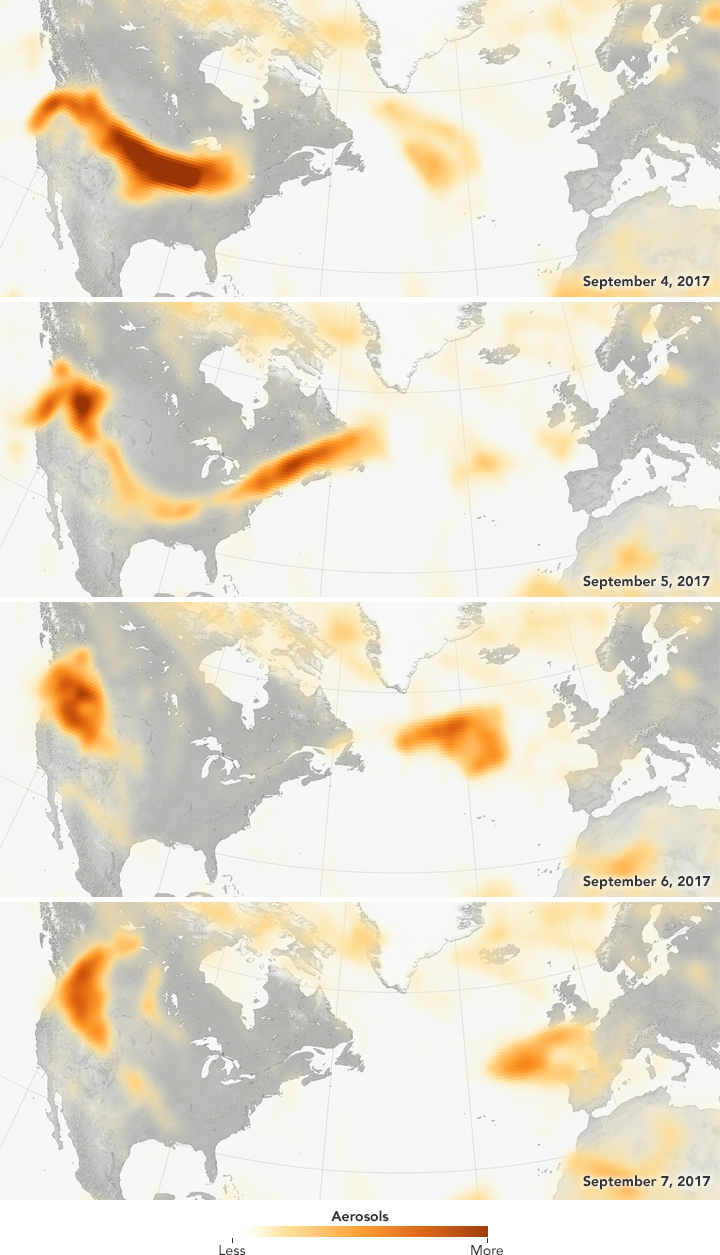 On September 5, 2017, residents of the Pacific Northwest awoke to ash falling from the sky like snow. But even as ash hit the ground, wildfires burning across the western United States and Canada lofted smoke high into the atmosphere. Some of it drifted all the way to Europe.

Snapshots of the smoke’s intercontinental journey are shown in the maps above. The data were collected from September 4–7 by the Ozone Mapping Profiler Suite (OMPS) on the Suomi NPP satellite. The maps show relative aerosol concentrations, with lower concentrations in yellow and higher concentrations in dark orange-brown.

Throughout the series, high concentrations of aerosols appear over their sources in the Pacific Northwest. But prevailing winds also swept up the high-altitude smoke aerosols and carried them east across the continent. On September 4, the smoke appears to have arrived over the U.S. Midwest, and by September 5 it reached Newfoundland. By September 6, the smoke cloud is obvious over the middle of the Atlantic Ocean.

“You can see that the smoke cloud on September 6 is part of the long stream of smoke emanating from the Pacific Northwest,” said Colin Seftor, an atmospheric scientist working for NASA’s Goddard Space Flight Center. “It almost looks like it was flung across the Atlantic.”

By September 7, the smoke had arrived over Ireland, the United Kingdom, and northern France. These aerosols are high in the atmosphere, so they are not a serious concern for near-ground air quality and human health. Still, it shows how events on one continent can have effects halfway around the world.

“It’s not that uncommon for smoke from fires in North America to reach Europe,” Seftor said. He has casually noticed, however, that the smoke clouds reaching Europe this year seem to be larger and thicker. He also points out that they seem to be more persistent; large fires in mid-August sent smoke to Europe that hung around for days. 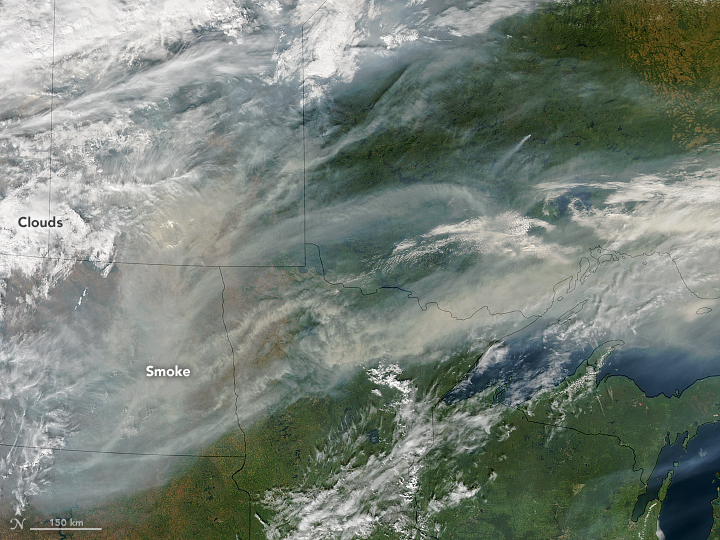 Wildfires were burning long before these maps were compiled, and they continue to burn even now. This natural-color image shows smoke across the upper Midwest on September 13, 2017, as observed by the Moderate Resolution Imaging Spectroradiometer (MODIS) on NASA’s Aqua satellite. Record heat in parts of the U.S. West has been cited as a possible cause for the widespread fire activity this year—which was somewhat unexpected, given the region’s wet winter and spring.

“There has been a lot of smoke over the whole northern hemisphere this year, and that is somewhat striking to me,” Seftor said. “It’s going to take awhile for everything to dissipate.”