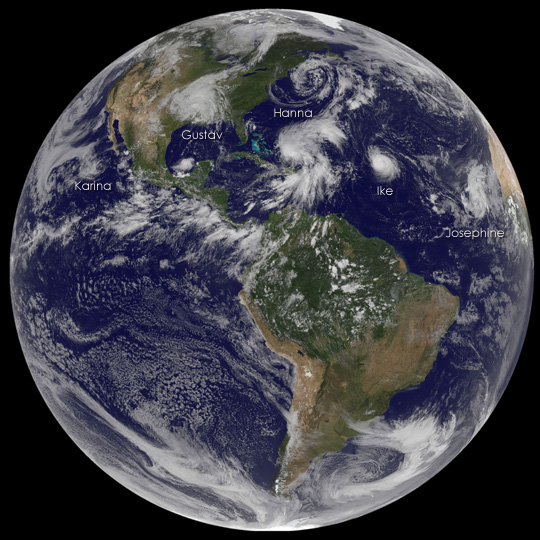 The Atlantic hurricane season typically peaks in early to mid-September after the ocean’s surface has had time to heat up in the summer sun. As if on cue, a string of storms formed over the Atlantic as September approached during the 2008 hurricane season. When the GOES satellite captured this view of the atmosphere at 1:45 p.m. Eastern Daylight Time on September 3, four storms were lined up across the Atlantic, and one had developed in the Eastern Pacific. GOES’ view of the clouds are overlaid on the NASA Blue Marble.

Near the African coast, Tropical Storm Josephine was slowly losing power under the influence of dry air and contrary winds. The storm is little more than a cluster of clouds in this image.

Hurricane Ike is the most well-established storm in the image. The tight circle of bright clouds was an intensifying tropical storm that would reach hurricane status with winds near 130 kilometers per hour (80 miles per hour) within two hours of the time the image was taken. Ike is the fifth hurricane of the Atlantic season, and the National Hurricane Center predicts that it could become a major hurricane in four or five more days.

Next in line is Tropical Storm Hanna. Formerly a hurricane, Hanna weakened into a tropical storm on September 2. The sprawling storm was intensifying as it moved northwest over the Bahamas. It was forecast to become a hurricane again before coming ashore over the southeastern United States.

The final two storms are tropical depressions. Gustav sits nearly stationary over Arkansas. Despite having been over land for two days, the storm maintains its circular shape. It was drenching the Mississippi Valley with flood-inducing rain. The National Hurricane Center issued warnings for floods, high winds, and tornadoes.

More benign is Tropical Depression Karina, west of Baja California. The storm formed on September 2 and was quickly degenerating by September 3. It was not forecast to threaten land.