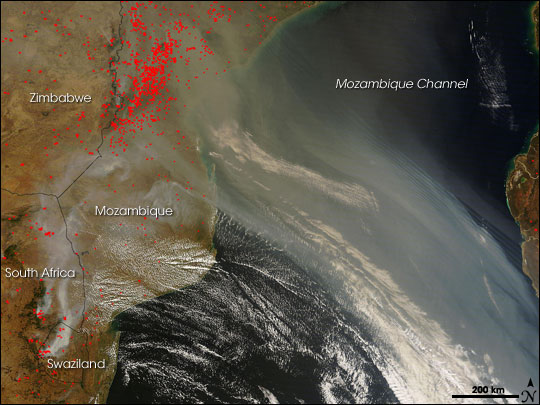 A river of smoke several hundred kilometers wide flowed off the southeast coast of Africa in early September 2008. The smoke was coming from hundreds, probably thousands, of fires burning in Mozambique, South Africa, and Swaziland. September is near the end of southern Africa’s dry season, and intentional agricultural fires as well as accidental forest fires are common. According to BBC news, at least 20 people had been killed by out-of-control fires in South Africa as of September 2.

This image of the area on September 1 was captured by the Moderate Resolution Imaging Spectroradiometer (MODIS) on NASA’s Terra satellite. Places where the sensor detected actively burning fires are marked with red dots. Different clusters of fires seem to be making smoke of different colors. The fires concentrated along the border of Zimbabwe and Mozambique are churning out brownish smoke, while the more widely scattered fires in South Africa are making whiter smoke. The smoke was flowing at a higher altitude than the scattered clouds, which gives the clouds a dirty appearance.

The plume of smoke gives a hint at what was going on in the atmosphere the morning MODIS captured this image. The sharply defined boundaries of the smoke plume suggest that it is being channeled along the boundary of an air mass, or perhaps squeezed between two different air masses. The relatively clear skies to the northeast of the plume suggests high atmosphere pressure at the surface. (High pressure is created when air sinks, piling up at the surface. When air sinks, it warms, and clouds evaporate.) In the southern hemisphere, air circles counterclockwise around areas of high pressure. The flow of smoke is consistent with a high-pressure area toward the upper-right part of the image.

In late August and early September 2008, widespread fires in Mozambique, Zimbabwe, and South Africa poured smoke out of the Indian Ocean.