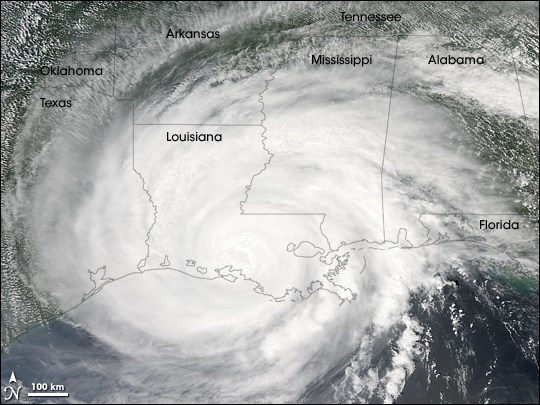 On August 25, the National Hurricane Center issued its first public advisory on the storm system that would eventually become Hurricane Gustav. Gustav was the seventh named storm of the 2008 Atlantic hurricane season, and the first major (Category 3 or higher) storm to threaten the mainland United States. Since its formation in the Caribbean Sea, it has battered Haiti, Jamaica, and Cuba on its west-northwest path toward the Gulf of Mexico. On September 1, 2008, Gustav made landfall on the Gulf Coast in central Louisiana as a Category 2 storm.

This photo-like image of Gustav making landfall was captured by the Moderate Resolution Imaging Spectroradiometer (MODIS) on NASA’s Aqua satellite on September 1 at 2:00 p.m. Central Daylight Time (19:00 UTC). The storm’s eye was indistinct but still detectable just north of Vermilion Bay, located in middle of the Louisiana coastline. The storm was large, but it was losing the well-defined spiraling structure of a powerful storm. As of late Monday afternoon, the forecast showed that a weakening Gustav would continue its northwestward path into Texas through Wednesday afternoon before bending back, clipping the corner of Oklahoma, and heading into Arkansas.