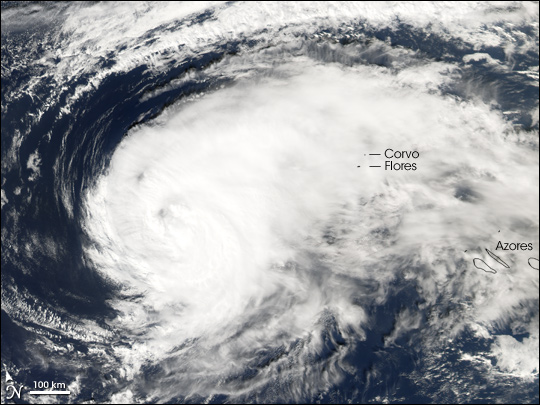 Adrift in the central Atlantic Ocean off the coast of Portugal, the Azores Islands appeared poised to take a nearly direct hit from Hurricane Gordon on September 19, 2006. According to the 11:00 a.m. (Eastern Daylight Time, September 19) discussion from the National Hurricane Center, Gordon was remarkably well-organized for a storm that had moved so far north of the typical hurricane latitudes. The report stated, “There is only a hint of an eye on satellite imagery, but the cloud pattern remains very well organized for a tropical cyclone at such high latitude.” As of the 11:00 a.m. report, Gordon—although weakening—was predicted to strike the Azores as a hurricane.

This photo-like image from the Moderate Resolution Imaging Spectroradiometer (MODIS) on NASA’s Aqua satellite shows just what the forecasters meant. Although the Gordon’s central “eye” was not a distinct vortex, the clouds were still obviously spiraling around the storm’s center as it approached the Azores Islands of Flores and Corvo from the west. The image was captured at 3:50 p.m. local time in the Azores (15:50 UTC) on September 19. Hurricane Gordon had sustained winds of around 135 kilometers per hour (85 miles per hour) at the time this satellite image was acquired, according to the University of Hawaii’s Tropical Storm Information Center.

Gordon was the seventh named storm of the 2006 Atlantic hurricane season. It formed as a tropical depression (area of low air pressure) off the Leeward Islands on September 10, graduated to a tropical storm on September 13, and intensified to a Category 3 hurricane over the next 24 hours. According to a map from the National Hurricane Center showing the tracks of all Atlantic Ocean hurricanes and tropical storms (collectively called tropical cyclones) between 1851 and 2004, a tropical cyclone passing over the Azores Islands is a very rare occurrence. Indeed, out of the more than 1,300 storms on the graphic, only a handful passed near the Azores. (The Azores are so small that they are not labeled on the National Hurricane Center map; however, they would sit inside the grid box that covers 25 and 30 degrees West, and 35 and 40 degrees North). 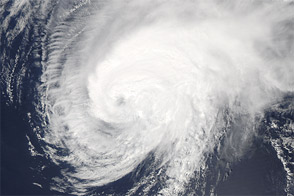