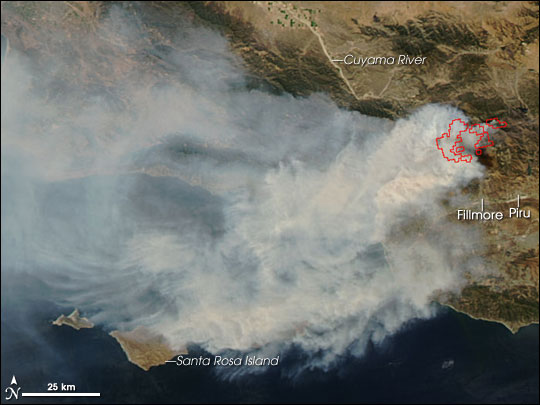 Northwest of Los Angeles, the Day Fire was churning out a thick, snake-like plume of smoke (see large image) on September 17, 2006, when the Moderate Resolution Imaging Spectroradiometer (MODIS) on NASA’s Aqua satellite passed overhead and captured this image. Places where the sensor detected actively burning fire are outlined in red. The smoke blankets several of the Channel Islands, leaving Santa Rosa partially visible.

The human-caused fire had been burning since September 4 in mixed brush and scattered timber in the Los Padres and Angeles National Forests and the Sespe Wilderness. As of September 18, 2006, the 60,589-acre fire was only about 15 percent contained. Evacuations and road closures were in place in the area, including the northwest part of Fillmore.

The Day Fire grew explosively over the weekend of September 16, when winds picked up dramatically. The blaze grew more than 50,000 acres in one day according to an article on the LATimes.com Website. Daily images of the area provided by the MODIS Rapid Response Team show a dramatic difference in the fire’s size and smokiness on September 16 and 17. According to the daily report from the National Interagency Fire Center, the rapidly spreading fire threatened homes, a watershed, campgrounds, power and gas lines, and communications equipment.