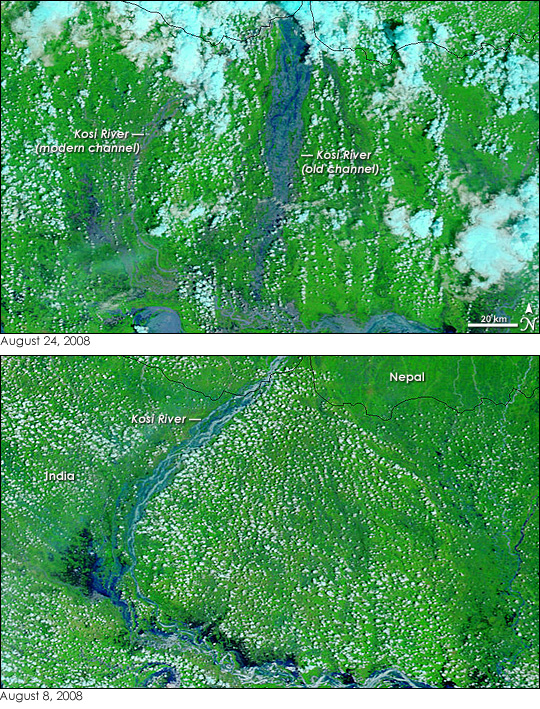 Monsoon rains regularly swell rivers in northern India, but in 2008, the Kosi, a tributary of the Ganges and a major river in its own right, did something different. It burst through its banks to flow into a channel it had abandoned more than 200 years ago, reported the Times of India. The flooded channel swept over a region not accustomed to flooding and forced more than a million people from their homes. The flood is clearly visible in these images, collected by the Moderate Resolution Imaging Spectroradiometer (MODIS) on NASA’s Terra satellite on August 24 (top) and August 8 (bottom).

On August 8, the braided channels of the Kosi River curved westward out of Nepal in a “c” shape before flowing into the Ganges (below the lower edge of the image, visible in the large image). On August 24, the Kosi cut due south, bypassing the previous arc formed by the river’s modern channel. The flooded channel was kilometers wide in places. Water still flowed through the modern channel on August 24, but the river seemed smaller than it had two weeks earlier.

Images such as these are useful in assessing the overall extent of a disaster. The images are not what you might see if flying over the scene in an airplane. MODIS records light reflected from Earth’s surface in many different wavelengths of light, only some of which are visible to the human eye. These images combine visible light and infrared light to increase the contrast between muddy brown flood water and brown earth.

In this type of image, water is usually dark blue and black. Both sediment-laden water and water-saturated earth are a lighter shade of blue. In the lower image, the channels of the Kosi are silvery from reflected sunlight. Large towering rainclouds in the top image are pale blue, while lower-altitude, warmer clouds are white. The plant-covered land is bright green. The large images, which include a wider area, shows additional flooding on rivers throughout northeastern India.

Monsoon rains regularly swell rivers in northern India, but in 2008, the Kosi, a tributary of the Ganges and a major river in its own right, did something different. It burst through its banks to flow into a channel it had abandoned more than 200 years ago.