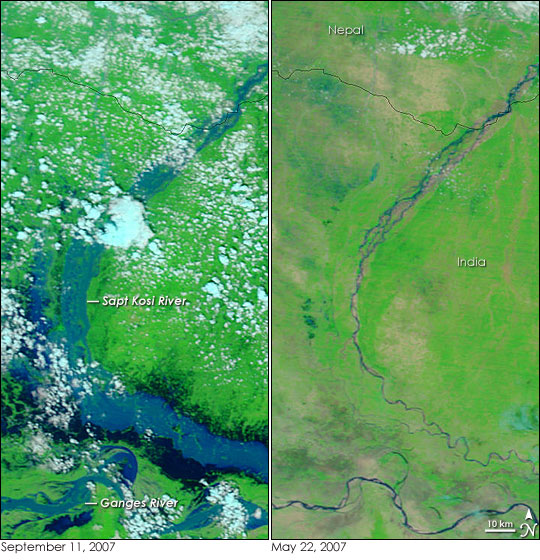 Just as the summer floods were starting to subside, September brought more rain to South Asia. The heavy monsoon rain pushed rivers in Northeast India, Nepal, and Bangladesh over their banks and forced more than a million people from their homes. These images show floods on the Sapt Kosi River in northern India. The river curves from Nepal across the Ganges Plain, where it eventually joins the Ganges River. Flowing from the Himalaya Mountains, the river is prone to flooding in the summer when snow melt combines with monsoon rains to increase the river’s flow. It is one the the major tributaries of the Ganges River.

The contrast between winter and spring’s dry-season water levels and late-summer, rainy-season water levels is illustrated by this pair of images. The left image was taken on September 11, 2007, after several days of heavy rain. The right image is from May 22, 2007, just before the summer monsoon started. In September, the river was several kilometers wider than it had been in late May. The water is light blue, an indication that it is muddy. Though the river was widest in India, it was also swollen in Nepal. In the days that preceded September 11, heavy rains triggered floods and landslides along rivers throughout Nepal, leaving at least 15 dead, reported the Agence France-Presse on September 9. Along the bottom of the image, the Ganges River was also fuller than it had been earlier in the year. Additional flooding on the Ganges and its tributaries can be seen in the large images, which show a wider view of the Ganges Plain.

The images were both captured by the Moderate Resolution Imaging Spectroradiometer (MODIS) on NASA’s Terra satellite and were made with a combination of infrared and visible light to increase the contrast between water and land. In this type of image, water is black, though sediment can color the water blue. Plant-covered land is bright green, and bare earth or sparsely vegetated land is tan. Clouds are light blue and white. A photo-like version of the images is available from the MODIS Rapid Response System, which provides daily images of northern India.