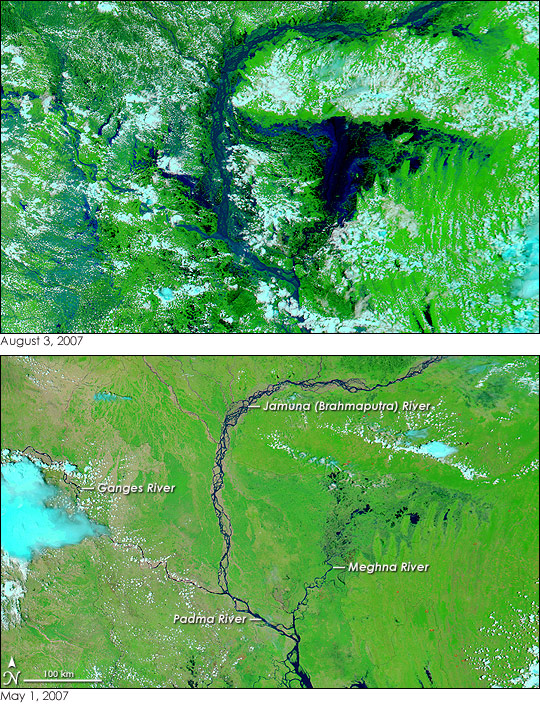 A large portion of Bangladesh was awash with floods when the Moderate Resolution Imaging Spectroradiometer (MODIS) on NASA’s Aqua satellite captured the top image on August 3, 2007. The low-lying nation is an alluvial delta, and therefore, is extremely prone to flooding. In July 2007, heavy monsoon rains filled the Brahmaputra, Padma, and Meghna Rivers, leading to the floods shown here. The Jamuna, a branch of the Brahmaputra River, arcs through the center of the scene, its braided waterways woven into a single thread where the river is overflowing. A branch of the Jamuna flows east into the Meghna River. The wetlands that surround these rivers are full of water, and the rivers themselves are swollen. The Padma River, formed by the convergence of the Ganges and Jamuna Rivers, is also flooded.

The severity of the floods can be seen in the contrast between the top image and the lower image, which was taken on May 1, 2007, before the monsoon rains began. In the dry season, the course of each river is clearly defined, not blurred by excess water. The images were made with infrared and visible light to increase the contrast between water and earth. In this type of image, water is black or blue, where colored with sediment. Plant-covered land is bright green, and bare earth or lightly vegetated areas are tan. Light blue and white clouds dot the scene. In the lower image, red dots mark the location of fires.

The floods shown here stranded hundreds of thousands of people in Bangladesh, one of the world’s most densely populated nations, reported BBC News. As of August 3, nearly 20 million people had been displaced by monsoon flooding in Bangladesh, India, and Nepal, added BBC. Some of the floods in northeastern India were visible when Aqua MODIS flew over on August 3. The intense rains of the summer monsoon typically fall between June and October, so additional flooding is likely.

Daily images of Bangladesh are available from the MODIS Rapid Response System in both false color, as shown here, and photo-like true color.