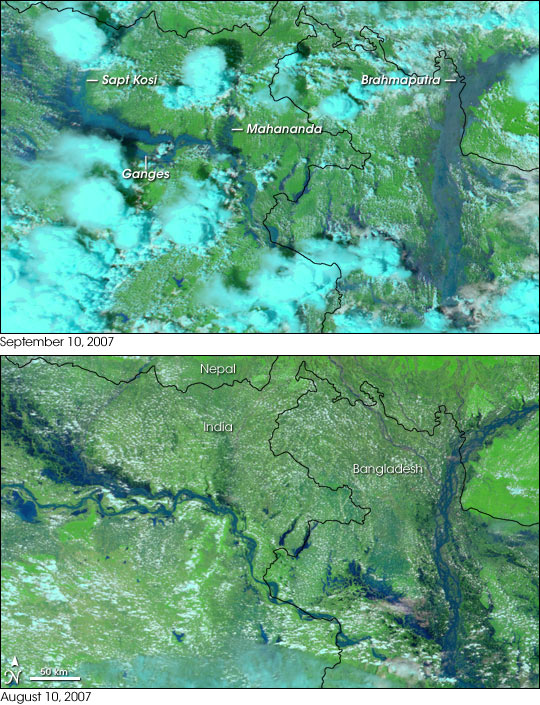 The summer flood season was coming to an end, and rivers were subsiding when late-season monsoon rain triggered a fresh round of flooding in early September 2007. Water levels on the Brahmaputra and the Ganges Rivers simultaneously rose to dangerous levels displacing more than a million people in India and Bangladesh, reported Agence France-Presse and the BBC. This pair of images, collected by the Moderate Resolution Imaging Spectroradiometer (MODIS) on NASA’s Aqua and Terra satellites, compares September’s flood with the earlier summer flood. To compare these flood scenes to conditions during the dry season, see Floods in Bangladesh.

Water in these images is blue or black, vegetation is green, and clouds are turquoise and white. The Ganges River and its tributaries, particularly the Sapt Kosi and the Mahananda, were larger on September 10, top, than they had been at the height of the previous summer floods just one month earlier. The most significant flooding, however, was on the Brahmaputra River. In August, the braided channels of the river were still visible despite the floods. By September, the river was so swollen that none of its usual structure was visible. The water was also lighter in color, an indication that it carried more sediment than it did previously.

You can download a 250-meter-resolution KMZ file of the floods suitable for use with Google Earth.