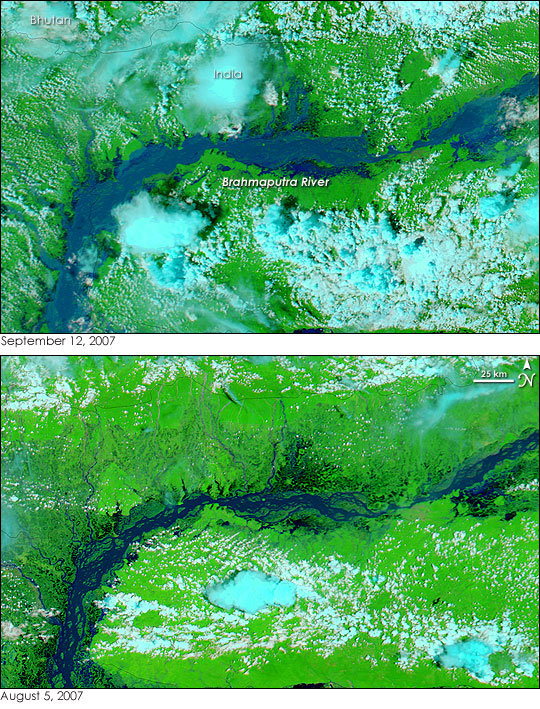 India’s Brahmaputra River was already flooded in early August (bottom image), but those floods turned out to be small compared to the floods that hit the river in early September (top). The river flooded for the third time in 2007 when monsoon rain pounded northeastern India, Bhutan, and Bangladesh in September, reported the BBC on September 11. As these images illustrate, the September floods were the worst of the year, forcing the Indian government to evacuate some 800,000 people from the banks of the river. An additional 500,000 people were evacuated downstream in Bangladesh. The floods damaged crops that had been replanted after the August floods, said the BBC.

The Moderate Resolution Imaging Spectroradiometer (MODIS) on NASA’s Aqua satellite captured these images of the swollen river. Both images were made with a combination of infrared and visible light, which makes water appear black or dark blue. Plant-covered land is bright green, and clouds are turquoise and white. In the top image, taken on September 12, the Brahmaputra is more than 25 kilometers wide in places. The braided channels of the river disappeared as water levels rose enough to blend the channels into a single wide, blue ribbon. Tributaries flowing in from the Himalayan kingdom of Bhutan are also swollen. The water is a dusty blue color compared to the dark blue color seen in early August. The lighter shade of blue indicates that the water is thick with sediment, a common sign of recent flooding.

MODIS captured the lower image on August 5, 2007, during the year’s second round of flooding on the Brahmaputra. The river is wider than it had been during the dry season, but it is much smaller than it would become a month later.