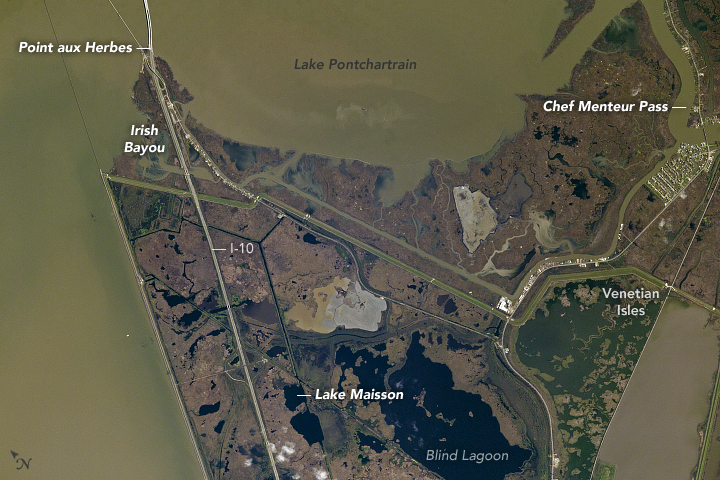 An astronaut aboard the International Space Station took this photograph of eastern New Orleans, along the southeastern shores of Lake Pontchartrain. Known as the rural side of New Orleans, the landscape is largely lakes, marshes, and bayous, widely dispersed suburbs, and Bayou Sauvage National Wildlife Refuge, the largest urban refuge in the United States.

The geographic names of the region—Point aux Herbes, Lake Maisson, Irish Bayou—reflect the influence of European settlers. New Orleans was established by French colonists in the 1700s, later ruled by Spain, and then finally sold to the United States as part of the Louisiana Purchase in 1803. The Irish cultural heritage stems from a wave of immigration in the early nineteenth century.

In contrast with the significantly older downtown area, most of the development in Eastern New Orleans began in the 1960s. Hurricane Katrina (2005) caused extensive damage to this area, closing a large number of businesses and halting development—a situation from which the area has not yet recovered.

Interstate 10, the fourth largest and the southernmost interstate highway in the U.S., runs through the scene. It stretches from downtown New Orleans (approximately 20 miles/33 kilometers south of Blind Lagoon) and across the Twin Span Bridge at the top of the image.

According to National Weather Service records, an estimated 106 tropical cyclones have hit Louisiana since the 1850s, or every 2.8 years. With an average elevation below sea level, the entire New Orleans area is particularly vulnerable to these violent storms. The geometry of the eastern Louisiana coastline and of the Mississippi River delta creates a “corner” that sticks out into the Gulf of Mexico. When there is a storm surge, it is amplified by these coastal features, frequently leading to severe flooding.

Astronaut photograph ISS050-E-51291 was acquired on February 18, 2017, with a Nikon D4 digital camera using an 1150 millimeter lens, and is provided by the ISS Crew Earth Observations Facility and the Earth Science and Remote Sensing Unit, Johnson Space Center. The image was taken by a member of the Expedition 50 crew. The image has been cropped and enhanced to improve contrast, and lens artifacts have been removed. The International Space Station Program supports the laboratory as part of the ISS National Lab to help astronauts take pictures of Earth that will be of the greatest value to scientists and the public, and to make those images freely available on the Internet. Additional images taken by astronauts and cosmonauts can be viewed at the NASA/JSC Gateway to Astronaut Photography of Earth. Caption by Andi Hollier, Hx5, JETS Contract at NASA-JSC. 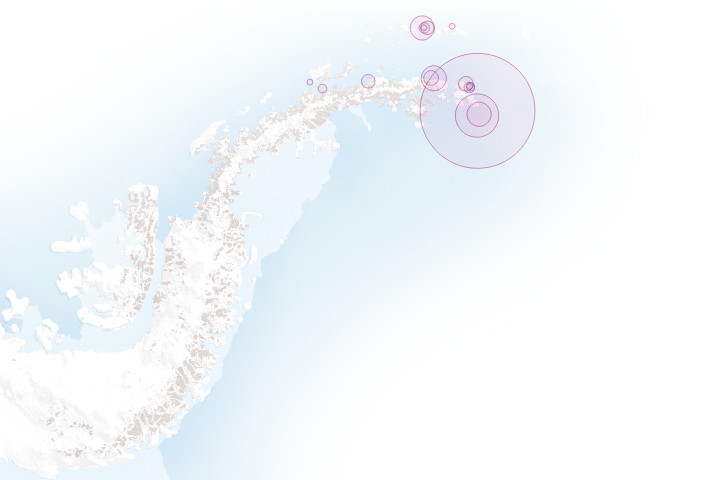