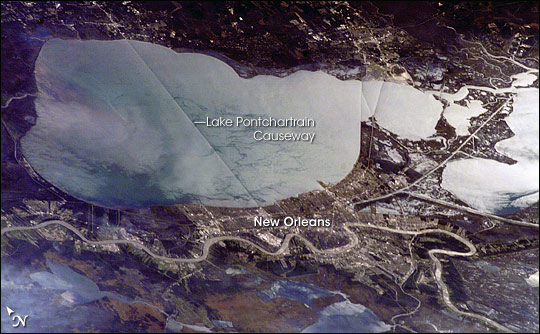 New Orleans sits within a shallow depression underlain by unconsolidated (loosely settled) river sediments. This location makes the city particularly vulnerable to subsidence (sinking) and flooding. The average elevation of metropolitan New Orleans is 1.8 meters below sea level, and a complicated system of levees, pumps, and upstream control structures on the Mississippi River is necessary to maintain dry conditions in the city. Several processes are responsible for the ground subsidence: groundwater withdrawal, reduction of sediment delivery by the Mississippi River (spanning the lower part of the image) because of flood control and other engineering, and land use changes, such as draining of wetlands for development. The low areas can be flooded by river floods, storm surges, or failure of levees holding back surrounding lake waters—as demonstrated catastrophically during Hurricane Katrina in 2005.

In this astronaut photograph from November 16, 2006, sunglint—light reflected directly back to the camera onboard the International Space Station (ISS) from a water surface—accentuates the wetland setting of New Orleans by highlighting the numerous lakes, ponds, and rivers (in various shades of silver-gray) surrounding the city. The image was acquired by an astronaut looking southwest from the ISS, which was located over north-central Alabama at the time this image was taken. (The perspective seems odd because the astronaut was upside down relative to the Earth when he took the picture.) Lake Pontchartrain borders New Orleans to the north, and the Lake Pontchartrain Causeway (36 kilometers in length) appears as a dark linear feature against the lake surface. Variations in the color of the water east and west of the Causeway reflect movement of the surface waters, including surface currents and wind-induced roughening. The patterns are visible because of surfactants (natural or synthetic chemicals like detergents that reduce surface tension). Low cloud cover produces a blue-gray haze at lower left.

Astronaut photograph ISS014-E-8179 was acquired November 18, 2006, with a Kodak 760C digital camera using an 180 mm lens, and is provided by the ISS Crew Earth Observations experiment and the Image Science & Analysis Laboratory, Johnson Space Center. The image in this article has been cropped and enhanced to improve contrast. The International Space Station Program supports the laboratory to help astronauts take pictures of Earth that will be of the greatest value to scientists and the public, and to make those images freely available on the Internet. Additional images taken by astronauts and cosmonauts can be viewed at the NASA/JSC Gateway to Astronaut Photography of Earth.