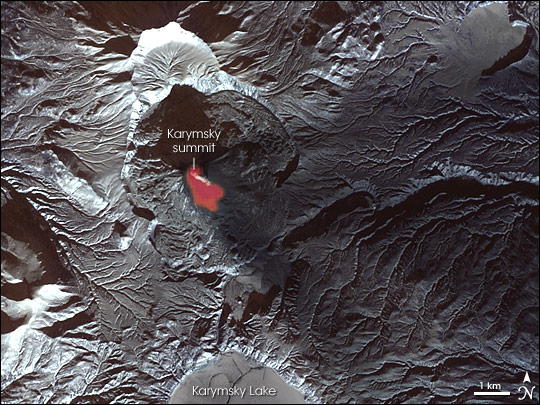 One of Kamchatka’s most active volcanoes, Karymsky lived up to its reputation in late 2006, with intermittent activity throughout the fall. On December 19, 2006, the Advanced Spaceborne Thermal Emission and Reflection Radiometer (ASTER) on NASA’s Terra satellite captured this image of the Karymsky Volcano and the surrounding region. To create this image, ASTER looked at light waves outside the human range of vision, including thermal infrared energy that humans would sense as heat. The red area near the summit indicates a hotspot of volcanic activity, and the tiny white streak over the hotspot may be a plume of steam. The dark triangle east of the summit shows the path of volcanic ash from previous eruptions. Ridges and valleys carve the landscape throughout.

South of the volcano is Karymsky Lake. This lake occupies the caldera of what vulcanologists once believed to be an extinct volcano. A catastrophic eruption on New Year’s Eve 1996 proved them wrong, wiping out the surrounding forest with tsunami waves.