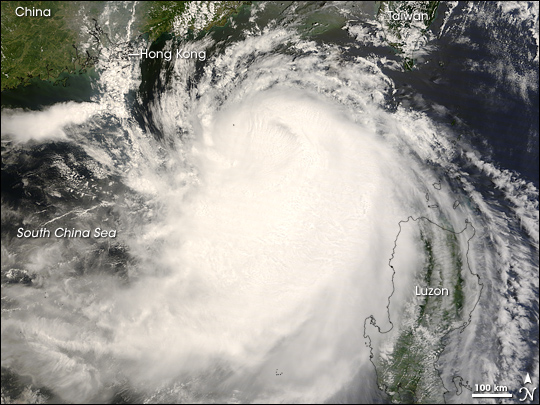 On the morning of August 21, 2008, Typhoon Nuri was crossing the South China Sea towards southeastern China. Forecasters at the Joint Typhoon Warning Center were expecting Nuri to come ashore just east of Hong Kong as a Category 1 storm system. Two days earlier, Nuri had grazed the northern end of Luzon in the Philippines. Heavy rain in the mountains of Luzon triggered flash floods and mudslides, killing seven people, according to the Associated Press.

This photo-like image was made from data collected by the Moderate Resolution Imaging Spectroradiometer (MODIS) on NASA’s Terra satellite at 11:00 a.m. local time (3:00 UTC) on August 21, 2008. In this image, the typhoon spans the South China Sea between Luzon and southeastern China. Thinner, translucent clouds appear along the storm’s eastern margin, while clouds appear largely opaque in the west.

Although Nuri had been forecast to strengthen to a Category 3 storm, the Joint Typhoon Warning Center revised its estimates based on the storm’s subsequent activity. After reaching a Category 2 status, the storm returned to Category 1 strength.